Five Areas to Watch in 2018 - FreedomUnited.org
This website uses cookies to improve your experience. We'll assume you're ok with this, but you can opt-out if you wish.Accept Read More
Skip to content
Back to Global News 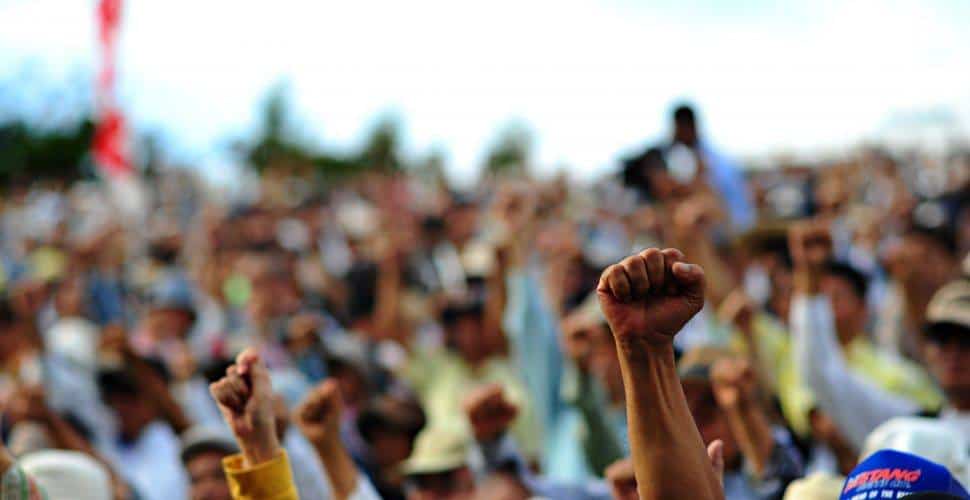 As we look forward to the year ahead, our Executive Director takes a moment to reflect on some key focus areas in the fight to end modern slavery in 2018, and considers where some of our greatest challenges lie.

Growing anti-migrant rhetoric leaves those who are poorly resourced, and have been unable to access increasingly restrictive legal migration routes, systematically discriminated against and so particularly vulnerable to exploitation.

In the latter part of 2017 the world became aware of the existence of slave markets selling people who had migrated from across the African continent, for forced labour, commercial sexual exploitation and even extortion. 2018 must bring respect to victims and survivors’ stories, and an end to the exploitation of migrants, including those exploited in immigration detention, often for the benefit of private contractors.

Only last year did we begin to understand the disproportionate impact of modern slavery on women and girls. The joint International Labour Organization and Walk Free Foundation global estimates put that figure at 71%, triggering much-needed focus on efforts that specifically protect and rehabilitate women and girls and tackle discrimination at its roots.

Meanwhile, I welcome improved identification of men and boys as victims, who might previously have been overlooked. In 2018 more services must be provided, as those who meet this need are often stretched.

The business community’s awareness and understanding of modern slavery rapidly progressed since the Modern Slavery Act was introduced in the UK, bringing with it the requirement for company reporting. Other countries, including Australia and Canada, are considering creating modern slavery legislation with similar, hopefully stronger, requirements on business. I hope that the Commonwealth Heads of Government meeting in April will result in more inquiries and stronger laws.

The impact of growing pressure on companies over 2018 is likely to result in growing pressure on governments that their own procurement practices are also subject to supply chain provisions. Efforts in the UK and the US have so far not succeeded. Will 2018 be the year for this change?

Technological developments will offer the anti-slavery movement more solutions in 2018. Already we are seeing blockchain technology used to monitor fishing catches, satellites that help identify sites of modern slavery, and apps to prevent brick kiln workers in India from falling into debt bondage.

Over the course of the year Freedom United will be deploying even more ways for you to interact with other supporters as a community and take action not only online, but offline as well.

Andy Hall, Elena, Gaspar, Malokhat, Biram… The list of people persecuted for their efforts to help bring an end to modern slavery is concerning. By bringing the international spotlight to their cases, we can help offer a degree of protection. A petition with a lot of signatures shows their persecutors that the world is watching.

We need as many people as possible to not only learn about modern slavery in 2018, but to translate that awareness into action to enable us to have a strong voice in support of organisations and individuals who are struggling to make their calls heard. Will you ask your friends to join?

Momentum and opportunities continue to build the anti-slavery movement, let’s grab it, overcome challenges and make progress in 2018.

There is no hope in changing peeople’s hearts ,as long as the present economic system allows a person to employ another person, for an amount of money that will not be enough to feed himself ,neither his famiily ……that is modern slavery !!!

Most people have a lack of knowledge about slavery so are unaware about its role in the production of the things they purchase. Disseminating information is key in turning the tide.

Who wrote and voted to pass the law enabling companies in the USA to employ a worker at 20 hours a week, thereby escaping laws requiring companies to get involved in insurance benefits and other government regulations? THAT is part of modern slavery, ‘legalized’ by government. Walmart, the largest employer in North America, Canada, the U. S. and Mexico, employs thousands of people under the 20 hour law. Political and private factions ‘teach’ this adversarial relationship. It should be symbiotic.

Finding ways of making life more tolerable and worthwhile in their own environment
such as reforming existing expectations and laws to allow for progress is one that allows hope for a better future.

Most people in Western countries do not want any more migrants to enter their country. The solution is to fix the problem in countries where people want to leave.

In many African countries they were better off when the Europeans ran the farms and factories. At least it gave them jobs and acertain amount of hope

A M
Reply to  John Smith

I think these aims don’t rule each other out. Living conditions should be at least tolerable everywhere AND people should be free to live and work wherever they want as long as they’re not guilty of serious wrongdoing.

dono
Reply to  A M

Free trade has become a race to the bottom where the country or nation that has the lowest wages and lest environmental restraints will win.