February 4, 2021:  Regions Bank, the largest bank in Alabama, has announced its plan to end its partnership with CoreCivic by not renewing their contract that is set to expire in 2023. This marks an important step forward in the movement to divest from CoreCivic. 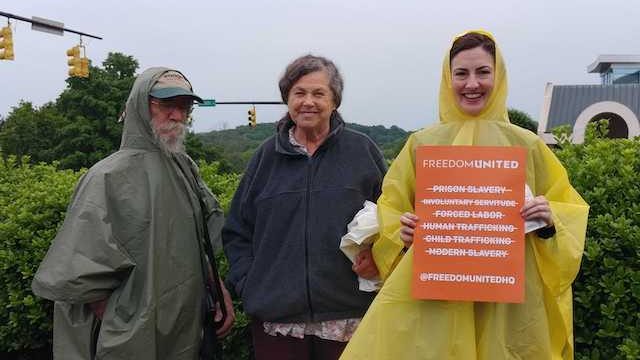 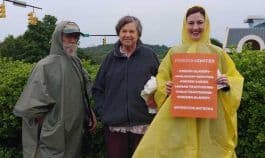 “…detainees began to work in the kitchen just so they could eat more…one detainee lost 68 lbs. Their ‘volunteering’ involved literally working for food.”1

Immigrants detained in a private prison in San Diego allege that they have been subjected to forced labor and threatened with solitary confinement or restricted visitation rights if they refused to work.2

The complainants say the company that owns the prison, CoreCivic, one of the largest private prison and immigration detention companies in the US, pays at most $1.50 per day, and sometimes nothing at all, for their work as kitchen staff, janitors, barbers and in various other roles.

But reports of forced labor are not isolated to immigration detention centers. In Oklahoma, incarcerated people sentenced to rehabilitation have been subjected to forced labor on chicken farms, without any recourse or access to an actual recovery program.3 Incarcerated people in California have also been forced into labor and made to risk their lives fighting the state’s wildfires for a dollar an hour or less.4

Forced labor in prisons is not an immigration issue, it’s an American one, replicated worldwide.

The United States is home to the largest prison system in the world, housing 25% of the world’s incarcerated people but only 5% of the global population, and spends more than $80 billion a year. Incarceration rates in the United States have increased by 700% in the last four decades, even though crime has dramatically decreased.5 Among those incarcerated, more than 60% are people of color. And Black men are six times more likely to be incarcerated than white men.6

This system of mass incarceration – at a rate per capita that surpasses every country on earth – is inherently discriminatory, disproportionately affecting communities of color while creating a never-ending pool of people to be exploited through forced labor in prisons and detention centers across the country for corporate gain.

Rolling back President Obama’s progress on minimizing private prison industry contracts, President Trump called for an increase of prisons and detainment centers by upwards of 450%, perpetuating and embedding a system that exploits people of color for private benefit.7 President Biden has ordered the Department of Justice to end its reliance on private prisons, but this does not affect immigration detention centers, including those operated by CoreCivic.8

The Thirteenth Amendment of the U.S. Constitution, which intended to end slavery, shockingly permits its use as a punishment for crime.9 CoreCivic claims to align with international standards but over the years has faced multiple complaints for violating human rights.10

CoreCivic must address allegations of forced labor, state that forced labor will not be tolerated, and raise wages for voluntary work by incarcerated people and immigrant detainees, that is comparable with free labor, to help stop exploitation.

CoreCivic is also currently facing another class-action complaint for allegedly attempting to defraud its investors by falsely representing improved operational policies and procedures around the rights and dignity of incarcerated people and detainees in multiple centers.11 We must speak out and let them know forced labor in detention is unacceptable.

Will you join us in helping to stop slavery in prison and immigration detention?

The culture of private prisons in the US and here in Australia demonstrates that crime DOES pay. If the operators see themselves losing out they will pressure governments to categorise more offences as jailable.

Let those multimillionaire corporations foot their OWN legal bills. They got the money; now let them pay the piper!! Bail out Main Street, not Wall Street with taxpayers’ money!!

Slave labor, chain gangs, indentured servitude, forcing someone to work, with the excuse they are paying for their misdeeds. Except when there is a financial incentive to exploit their labor, the misdeeds part becomes foggy…..and they just become part of a money making system, which at heart is often corrupt, and definitely immoral.

Unfortunately, forced labor is an issue that has always been a part of every society. As with any problems, we have to tackle the core of the matter in order to get an understanding for its existence. Greed is definitely one of the reasons. Individuals will always look for ways to enrich themselves at the expense of others hard labor, and the key to their success is always to maximize profit by saving on overhead cost, which in this case labor is. Incarcerated individuals have rights as well.

That seems like a significant exaggeration to me. I can think of many individuals and societies where individuals do NOT (let alone not always) “looking for ways to enrich themselves at the expense of others[‘] hard labor”. Also, in many cases where that is happening, it seems to me that maximizing profit is often an unwise folly in the long-run and in the large picture, rather than being “the key to success […] always”.

Slave labor in Britain became immoral and unethical in the 19th Century! But in America the slavers always felt they had been cheated by the North! Southerners feel they must have slavery. The GOP has always wanted workers to accept $1.50 or so per day. Privatized prison has opened the door for them.

We welcome CoreCivic’s stated commitment to human rights laid out in your Human Rights Policy Statement1 but express our deep concern regarding recent allegations of forced labor in the Otay Mesa Detention Center set out in a pending class action lawsuit, which suggests this commitment is not being met.

Noting the allegations against CoreCivic, the increasing use of forced labor against civil detainees in immigration centers, and as one of the country’s largest providers of prison and detention services, we urge CoreCivic to:

– Add explicit language denouncing forced labor to the company’s Human Rights Policy Statement, with measures to verify that it is enforced and enacted across all company sites; and

– Raise the wages paid to detainees for voluntary work to a level that is comparable for free workers, as set out in International Labour Organization standards.