Oklahoma's Indentured Servants - FreedomUnited.org
This website uses cookies to improve your experience. We'll assume you're ok with this, but you can opt-out if you wish.Accept Read More
Skip to content
Back to Global News 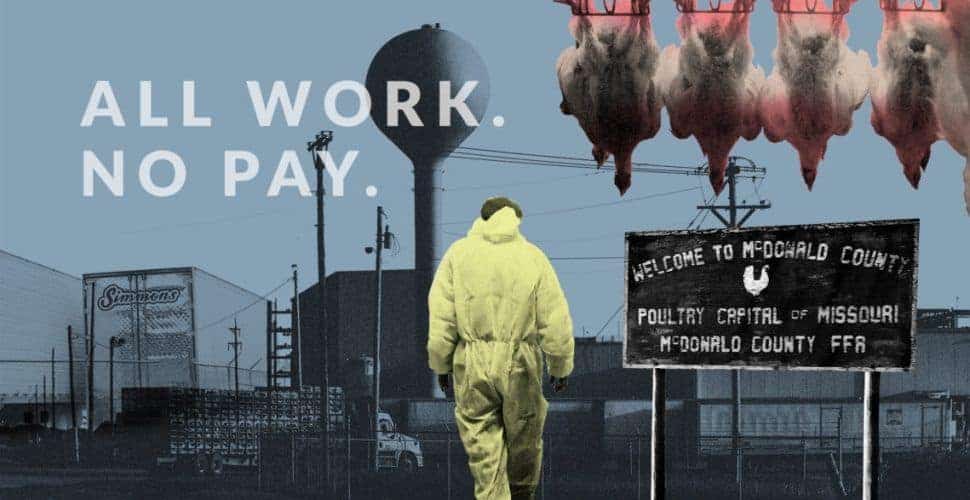 Brad McGahey thought he was being spared from prison when he was sent by a judge to CAAIR in rural Oklahoma. Little did he know that he would end up becoming an indentured servant, plucking feathers out of slaughtered chickens at one of America’s main poultry companies for no pay.

On paper, Christian Alcoholics & Addicts in Recovery, or CAAIR, is a rural retreat where “defendants stayed for a year, got addiction treatment and learned to live more productive lives,” reports Reveal.  Most of the men who ended up there were sent by courts from across Oklahoma and neighboring states as a way to keep nonviolent offenders out of prison. Yet CAAIR is turning rehab into a way to supply big businesses with free or cheap labor:

“In the rush to spare people from prison, some judges are steering defendants into rehabs that are little more than lucrative work camps for private industry, an investigation by Reveal from The Center for Investigative Reporting has found. The programs promise freedom from addiction. Instead, they’ve turned thousands of men and women into indentured servants. The beneficiaries of these programs span the country, from Fortune 500 companies to factories and local businesses.”

McGahey worked there for free while CAAIR pocketed his pay. “It was a slave camp,” McGahey said. “I can’t believe the court sent me there.” Another victim, Nate Turner, agrees: “It’s a work camp. They know people are desperate to get out of jail, and they’ll do whatever they can do to stay out of prison.”

Legal experts interviewed by Reveal say that forcing defendants to work for free may violate their constitutional rights. The 13th amendment bars slavery and involuntary servitude, except as punishment for convicts. But many of the men at CAAIR haven’t been convicted of crimes, and some even have their cases dismissed later on.

The American Civil Liberties Union of Oklahoma now is considering legal action against CAAIR in response to Reveal’s report.