Pledge to join the fight for Freedom For Girls. Join #FREEDOMFORGIRLS
This website uses cookies to improve your experience. We'll assume you're ok with this, but you can opt-out if you wish.Accept Read More
Skip to content 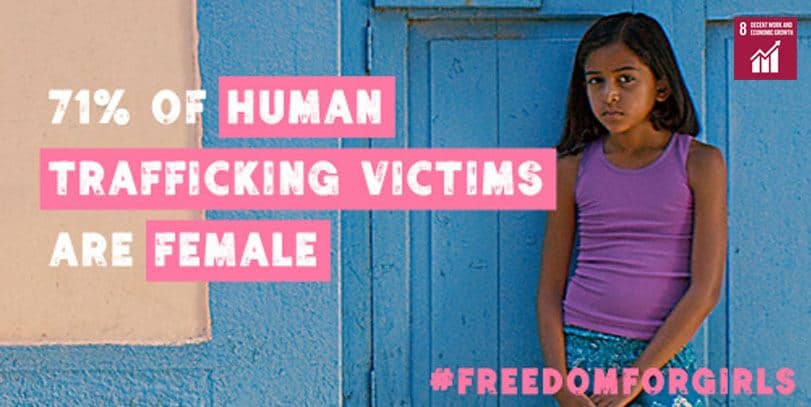 Credit: This video has been produced for Global Goals globalgoals.org/dayofthegirl

71% of modern slavery victims are women and girls.1 With an estimated 40.3 million people victims of modern slavery and human trafficking, that’s a lot of girls around the world who are being exploited for someone else’s benefit, or treated like a commodity, unable to leave because of threats, violence, coercion, and abuse of power.

Who are they? Girls like Phoebe*, a 17-year-old victim in Kenya forced into the commercial sex industry, or Sophie*, a 15-year-old victim who felt her childhood was stolen. She said no one seemed to want to help her whilst she was enduring two years of exploitation having been trafficked to the UK.

Sign the pledge to help end modern slavery and trafficking of girls, and join the fight to secure Sustainable Development Goal 8.7:

“Take immediate and effective measures to eradicate forced labour, end modern slavery and human trafficking and secure the prohibition and elimination of the worst forms of child labour, including recruitment and use of child soldiers, and by 2025 end child labour in all its forms.”2

Let’s join together and help stop girls from experiencing what girls like Sophie and Phoebe experienced. If we are big and loud enough we can hold governments, businesses and civil society to account and make ending modern slavery a priority.

#FREEDOMFORGIRLS, and freedom for all.

First we need to eliminate those who have supplied the demand side of this pure evil.

It’s time to stop treating girls and women like a commodity instead of a human being.

You got to have some sustainable factories or industry that girls and boys on Mindanao in the Philippines can learn skills at and make a high enough minimum wage so that don’t allow themselves to be trafficked to oil rich Middle East countries, such as Bahrain, as live-in, 24 hour a day household slaves, and have their passports taken from them upon arrival and then be forced to sign new contracts at half the wages they signed up for in Manila. May God Bless and protect you.

I hate to break it to you but human trafficking happens in every country. Deliberately highlighting one country and denying the involvement of other (white) nations goes against the morals and ethical conduct these campaigns are trying to encourage in others. Baharain is a tragic country but it’s not the only one who harbors slaves or silently allows sex trafficking. Let’s not discriminate. Let’s stop all of it.

Not impressed by the video. It shows very suggestive poses for girls in the dance movements, particularly the legs apart and the arms sweeping the body – this kind of dance was never devised to accompany a message of protection and dignity. The whole video resembles a rap music/pop video, which have always struck me as put together by men concentrating on explicit physical and sexual presentation of a person. Looking angry doesn’t offset this.

In My View the dance moves reflect what is, a socially acceptable global homogenous culture that objectifies and sexualises women, in this case girls.

Small girls (and Big) are Angry because daily they can be subjected to violence and as a result traumatised. Leaving little Hope for them to lead a healthy life when exposed to an environment that dictates How they will live their life.

I will continue to fight for these children. We are their voices. SPEAK UP!

I believe no girl should risk being a victim of human trafficking or modern slavery. That every girl’s freedom is a birthright, not a privilege.

I pledge to learn about modern slavery and human trafficking, and to use my voice to take action, so that together, in support of Sustainable Development Goal 8.7, we will end it by 2030.