Freedom Fortnight: How It All Started - FreedomUnited.org
This website uses cookies to improve your experience. We'll assume you're ok with this, but you can opt-out if you wish.Accept Read More
Skip to content
Back to Global News 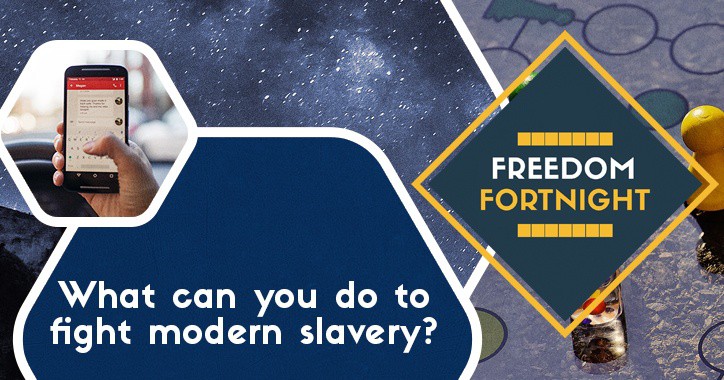 Freedom Fortnight: How It All Started

“The director’s been selling the orphans for sex.”
Stunned silence.
“Wait. What?!”
Head shaking like I hadn’t heard right.
Or out of disbelief.
That was it.
That was when my eyes were opened to the reality of sex trafficking.
I literally had no idea. I was completely shocked.
Heartbroken. Outraged.

Here I was leading a youth service trip to an orphanage in Eastern Europe to help with some of the obvious needs, like tables for the dining area and unclogging the sewer.

I wasn’t looking for it. Didn’t even know it was something to be looking for.
People more experienced than I recognized the signs. Thankfully, as a result, the director was removed and prosecuted.

“How could this be happening?” I was left to wonder. To kids. Some of them with mental disabilities, for heaven’s sake. Completely vulnerable. And by the person who was supposed to ensure they were safe and cared for.

A few years later I was at a conference and heard a woman share about her work with sex-trafficked women, about how many of them had their passports taken, they and their families threatened if they didn’t do what was demanded of them.

This time I was overwhelmed.

I couldn’t stop weeping, full on sobbing, for quite a while. I had never considered that women involved in commercial sex might not be doing it of their own free choice.

I wondered what my role in the anti-slavery movement might be, and I started trying stuff. Not anything rogue or vigilante or that I was unqualified to do, but I started sharing what I was learning, and started giving and raising funds for grassroots, frontline charities doing the things I wasn’t in position to do.

What if all the people who became aware of modern slavery/human trafficking had some very simple, specific, tangible next actions to take, ways they could begin to do what they could do, along the way learning, being inspired by progress and innovation, connecting with other people who care, and possibly finding aspects, places and organizations they resonate with where they could get more involved and make an even bigger difference…

What if everyone who became aware of slavery/trafficking began taking action, whatever their background, age or experience?

One day seemed too short to do more than scratch the surface, but 30 days seemed too long to focus on such a daunting and often traumatic topic. So I settled on two weeks – a fortnight, in British English. Each day covering a different topic or aspect, and each day empowering people to make a difference.

That’s how it started.

As an idea about how to help people move from awareness to informed and empowered to take difference-making action.
Freedom Fortnight – 14 days of action and focus on freedom from modern slavery/human trafficking.

What if your fourteen days meant someone else lived out the rest of their days in freedom, with dignity and delight?

About Tate Johnston:
Tate Johnston is the Amazon Best Selling author of Everyday Abolitionist: Discover What You Can Do To Help Stop Modern Slavery / Human Trafficking. He is a husband and dad, an everyday abolitionist and the founder of Freecember (freecember.org) and Freedom Fortnight (freedomfortnight.org). He holds a BA in Economics from the University of Virginia and an MA in Global Leadership with an emphasis in Children at Risk from Fuller’s School of Intercultural Studies.

Tate’s focus in the anti-human trafficking/anti-modern slavery (anti-HTMS) movement is educating, inspiring and empowering everyday people to move from awareness of modern slavery/human trafficking to taking informed, achievable, impactful, sustainable actions, growing in their understanding, identity, focus, connectivity and meaningful activity as abolitionists and helping people at risk of/affected by HTMS live in freedom with dignity and delight.