Call on the Uzbek Government to drop the charges against Malokhat
This website uses cookies to improve your experience. We'll assume you're ok with this, but you can opt-out if you wish.Accept Read More
Skip to content

Call on the Uzbek Government to drop the charges against Malokhat 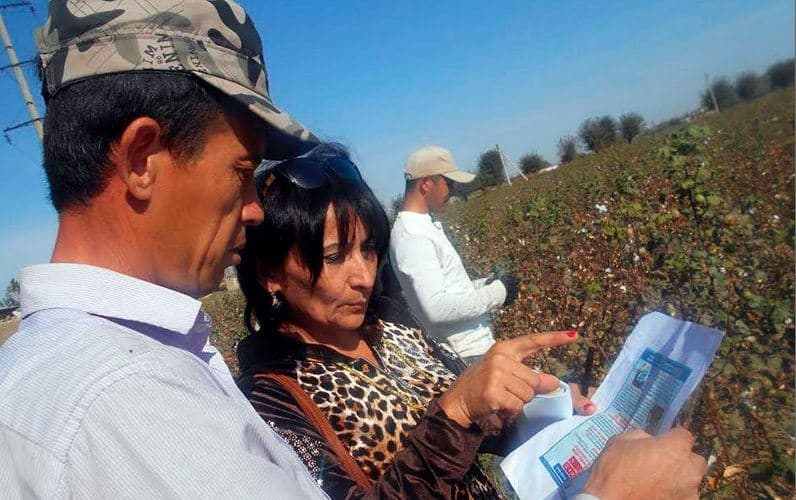 On November 12, 2017, Uzbek police raided the home of human rights activist Malokhat Eshonkulova and confiscated some of her belongings, including electric heaters, in a nearly 11-hour search for her computer and cell phone. Malokhat was targeted for organizing pickets calling on authorities to her work monitoring forced and child labor in Uzbekistan’s government-run cotton harvest.1

Despite the Uzbek President and Prime Minister’s recent public statements meant to demonstrate progress on addressing forced labor, the Uzbek authorities imposed $1400 in fines on Malokhat in retaliation for raising complaints about forced labor. If they are not paid, all of her belongings may be confiscated and sold.

In an attempt to clamp down on dissent, the authorities are using an antiquated registry permit system from Soviet times to threaten Malokhat with internal deportation from the capital region of Tashkent, where she lives with her family, to a remote region of the country.

Malokhat’s work and voice to illuminate human rights violations in Uzbekistan’s cotton industry must not be silenced.

Malokhat, along with her fellow activist Elena Urlaeva, was repeatedly arrested and harassed by Uzbek authorities for their attempt to document forced labor and human rights abuses throughout the 2016 and 2017 cotton harvests. They were accused of espionage, insulted, exposed to repeated searches — even forced to strip naked.2

In March 2017, Elena was detained in an institute and forced to undergo unnecessary psychiatric “treatment” for 23 days. We launched a campaign in partnership with Cotton Campaign to bring attention to Elena’s plight, helping to secure her release.3

We want the power of international solidarity to help Malokhat in the same way! Please join us in supporting her as she fights this harassment!

Uzbekistan is the fifth largest cotton producer in the world and each year forces more than one million of its citizens to grow and harvest cotton to meet national quotas. Citizens are mobilized in mass and forced to work under the threat of fines, job loss, school expulsion, criminal charges and loss of social security benefits.4 The industry “generates more than US$1 billion in annual revenue that goes into an opaque extra-budgetary account not open to public scrutiny and controlled by high-level government officials.”5

We cannot allow the Uzbek authorities to persecute brave individuals like Malokhat to cover up its crimes! Stand up now to protect Malokhat and demand these baseless charges are dropped!

I’m from Uzbekistan, and all of this is true. I hate this cotton slavery that almost all our people are in. Hope, there’ll be many more journalists and regular people, who are not afraid to say their opinion on what’s going on in my country.

Galya- I don’t know first hand but you do. I think the business is dreadful and hope to see the end of it.

The use of dangerous fertilizers, week-killers and pesticides exposes Uzbekistan’s children to chemicals which are highly toxic. Cotton uses more lethal chemicals than all the other crops on the planet.

Malokhat is standing up for the oppressed and we need more like her. How can such good work be a crime?

It’s not black against white against brown against catholic against Protestant against Muslim against atheists against believers against males against females against straight against gay or anyone else against anyone else. . The true struggle is the rich against the poor. Always has been, always will be. Nothing more, nothing less. They want slavery, preferably with slaves that believe that they are free. Those are the best kind. (Y’all can quote me on that 😉) Eric McCarron

We all need to band together and put all Walmarts out of business WORLWIDE…THEY R THE LARGEST SUPPORTER OF CHILD AND ADULT MODERN DAY SLAVERY… BOYCOTT WALMART S. ALL CHANGE STARTS W ONE PERSON. LOOK WHAT ROSA PARKS AND MLK DID TO IMPROVE THE LIVES OF MANY. AND BOTH STARTED OUT AS ONE…….

As ever, surely fear is behind the authorities’ action, because they know she is speaking the truth. And, given time, and our support, truth will have its way, because no system built on lies can survive.

This Campaign made an impact with 44,323 supporters!