We Cannot be Silenced - FreedomUnited.org
This website uses cookies to improve your experience. We'll assume you're ok with this, but you can opt-out if you wish.Accept Read More
Skip to content
Back to Global News 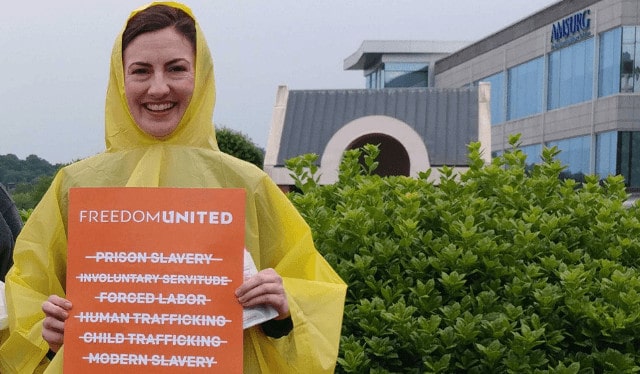 We Cannot be Silenced

Tactics to silence us will not work. CoreCivic took out a restrictive permit to block off the entire public sidewalk of Burton Hills Blvd, the very road where CoreCivic’s headquarters is located in Nashville, Tennessee.

This was the original site for a peaceful art event organised by Freedom United with the Red Sand Project. The action on Wednesday was relocated to a main street nearby.

The very next day CoreCivic published its first-ever Environmental, Social and Governance (ESG) report, which says the company has now adopted a “policy prohibiting and requiring mandatory reporting regarding human trafficking, including unlawful forced labor.”

Freedom United checked with Metro Works and the police department in advance of the action and was informed that no one needs a permit to be on public sidewalks.

“The timing and specifics of the restrictive permit indicated to us that it was sought by CoreCivic to prevent us from proceeding with our art event on the public sidewalk to raise awareness of prison slavery,” said Joanna Ewart-James, Executive Director of Freedom United.

“Although it felt like an attempt to silence us, it is clear we are being heard. We welcome the subsequent announcement that CoreCivic has now issued a first-ever ESG report, addressing our campaign ask for a policy prohibiting forced labor.”

With support from the Red Sand Project, a participatory artwork project aimed at raising awareness of modern slavery and human trafficking, participants symbolically showed CoreCivic that we will not tolerate any forms of modern slavery, including in detention centers.

“As a Nashvillian and native Tennessean, I want to know that the companies and organizations that are headquartered here and operate here are obeying the law and are following ethical principles,” said local activist Kathleen Chandler during the art event on Wednesday.

“There is no excuse for the way CoreCivic treats their prisoners and immigrant detainees. We need to demand better treatment.”

CoreCivic is currently embroiled in lawsuits across multiple states where inmates — including asylum seekers — have reported inhumane treatment and violations of anti-trafficking, involuntary servitude, and forced labor laws. Detainees in CoreCivic facilities report being paid just $1.50 per day or even nothing at all for their labor. Those who refuse say they have been threatened with solitary confinement and retaliation.

“CoreCivic claims that all work performed by inmates is ‘voluntary.’ But in cases where detainees who refuse to work for just $1 a day under ICE’s “Voluntary Work Program” report being threatened with solitary confinement or withholding of basic necessities like food and soap, can they honestly claim there is no element of coercion?” said Joanna Ewart-James, the Executive Director of Freedom United.

In this age, we would expect that there are laws to prevent the sorts of treatment that ‘clients’ of CoreCivic receive! Certainly, there should be laws governing civic bodies that they MUST obey; those laws MUSThttps be enforced!