Inmates Sue Indiana Private Prison for Human Trafficking -
This website uses cookies to improve your experience. We'll assume you're ok with this, but you can opt-out if you wish.Accept Read More
Skip to content
Back to Global News 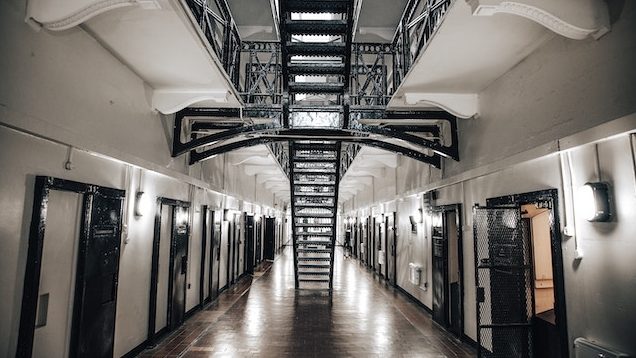 In what has potential to be a landmark case for prisoners’ rights, a new class action lawsuit against Indiana’s only for-profit prison charges that one group of inmates are victims of human trafficking and subjected to forced labor.

Damarcus Figgs and David Corbin v. GEO Group, Inc. alleges that inmates held in the Mental Health Unit of the New Castle Correctional Facility were detained for longer than necessary in order to generate a profit for the prison’s private operator, Florida-based GEO Group.

“The defendant here is not the government,” said David Frank, a Fort Wayne attorney representing the class plaintiffs. “The defendant is a private, for-profit corporation that has as its business model the exploitation of human beings in violation of human rights.”

Similar challenges have been brought before, though generally in the context of federal immigration detention centers. But what sets Figgs apart is that the case seemingly marks the first time a judge has ruled that a private prison operator can be liable for human trafficking in a punitive setting.

The merits of the case have yet to be litigated, but even if it doesn’t succeed, attorneys say Figgs could represent a major turning point in acceptable prison operations.

The plaintiffs, a class of roughly 100 inmates in the mental health unit, were each sent to the MHU after suffering trauma in prison, the complaint says. They are supposed to remain in the MHU for three to six months, the complaint continues, but “class members are almost always held longer than three months, usually longer than six months at the MHU, and at times for years.”

Frank’s argument included numerous legal claims, including peonage, Eighth and 14th Amendment violations, claims under the Americans with Disabilities Act and state law torts. But the only claims to survive were two brought under the Trafficking Victims Protection Act: forced labor in violation of 18 United States Code section 1589 and trafficking in violation of 18 U.S.C. 1590.

In partially denying GEO Group’s motion to dismiss, Judge Tanya Walton Pratt wrote, “Because the facts as stated by the Plaintiffs are taken as true for purposes of a motion to dismiss, the Court must accept that they are forced to work for GEO without wages (or miniscule wages of $10.00 per month), the purpose of that work is to turn a profit for GEO, and that GEO ‘obtains [its] persons and labor by scheme of misrepresentation and deceitfully holding itself out as a facility that would assist Plaintiffs.”

“The Court must also accept that ‘the conditions under which they perform services for [GEO] are harmful and include long periods of segregation and isolation, few breaks, and routine shackling,” added Judge Pratt.

GEO Group unsuccessfully argued that the TVPA contains a “civic duty” exception that means prisoners can be made to work. Judge Pratt rejected this, noting that in Channer v. Hall, 112 F.3d 214 (5th Cir. 1997), the “civic duty” exception only applies to the federal government and only in 13th Amendment cases.