Muslim Leaders Condemn Uyghur Internment Camps - FreedomUnited.org
This website uses cookies to improve your experience. We'll assume you're ok with this, but you can opt-out if you wish.Accept Read More
Skip to content
Back to Global News 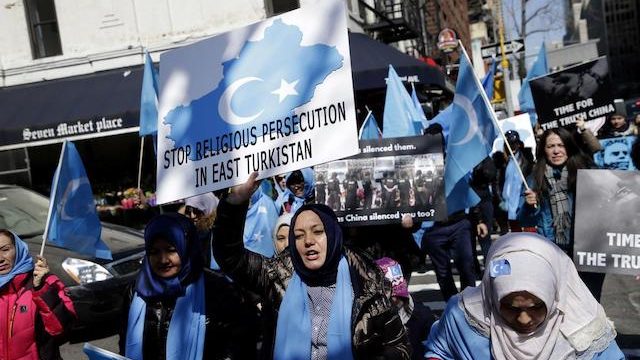 Protestors march to the UN to demand an end to the persecution of Uighurs on March 15, 2018. Photo credit: AP/Seth Wenig

More than 130 Muslim leaders and scholars in the United States have a signed a letter condemning the persecution of the Uyghur ethnic minority in China’s far western Xinjiang province.

Around one million Uyghurs have reportedly been put in internment “re-education” camps where they are forced to work in factories and learn the ideology of the Chinese Communist Party. Uyghurs are being detained on without charge, and the camps are widely seen as an attempt to strip them of their religion and language.

Besides calling for the immediate release of Uighur detainees, the letter calls for U.S. consumers to boycott imports produced by the detainees’ forced labor.

“We call upon fellow citizens to stop buying products produced through slave labor from these camps,” the statement says. “We thank the U.S. government for raising the issue of human rights abuses and detainment in the concentration camps and ask the rest of the world to do the same.”

Suleiman said the Uighur crisis, which he called “the world’s most blatant violation of any sense of religious freedom and human rights,” has not received the attention it deserves from world leaders.

The letter was started by the Sound Vision Foundation, based in Chicago. The foundation is also behind the Burma Task Force and the SaveUighur project, which advocate for Myanmar’s Rohingya Muslims and China’s Uyghur Muslims.

Uyghur activists have been frustrated by the lack of attention the internment camps has gotten internationally, especially in the global Muslim community.

“The Muslim-majority countries, every one of them has remained silent,” said Aydin Anwar, a young student activist.

“They all have deals with China. It’s really frustrating (for) Uyghurs to witness what we see as a betrayal.”

Where is the list of products and companies that need to be boycotted? If you want to assemble an army, you need to provide them with weapons.

Now if only trump and his sycophants would give a damn about Uighur persecution–not to mention all the nearby Muslim leaders kowtowing to Communist China.