Facebook Page Shames Employers Accused of Maid Abuse - FreedomUnited.org
This website uses cookies to improve your experience. We'll assume you're ok with this, but you can opt-out if you wish.Accept Read More
Skip to content
Back to Global News 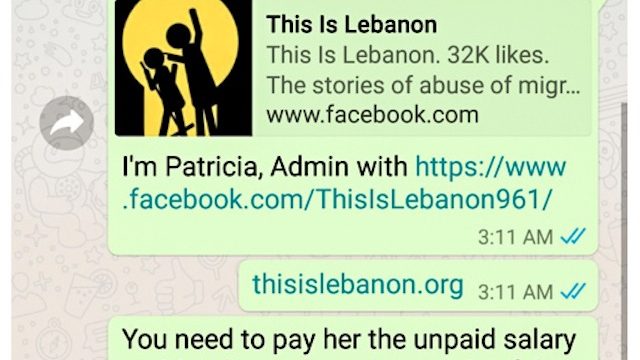 A post written in seven languages — those spoken by Lebanon’s migrant domestic workers — sits atop the Facebook page of “This is Lebanon.”

So far, hundreds have responded, and the group of activists often intervene directly in cases of domestic worker abuse and publicly expose bad employers. They often directly call employers and demand proof that they pay unpaid salaries, warning “pay or become famous.”

“We awake to more than 20 messages, from many different countries. They all want help for someone being abused in Lebanon,” Dipendra Uprety, the group’s founder, told Al Jazeera.

This Is Lebanon’s methods, however, are at times uncomfortable for those on the receiving end of the group’s pressure. They directly intervene with employers when notified of abuse. Depending on its degree, they will publicly expose those accused.

This Is Lebanon often posts the results of cases on its page. Late last year, a video was posted of a domestic worker who This Is Lebanon apparently helped obtain $10,000 in outstanding salary and return home.

In the comments below the video, a domestic worker says she needs help. Her employer is only paying her a fraction of her salary. “What’s your WhatsApp number?” This Is Lebanon comments.

That’s how a large chunk of their cases begin. After facing abuse, Uprety says many helped by This Is Lebanon become part of its growing network.

Some employers say that “This is Lebanon” is unjustly ruining their reputations. Jean (not his real name) says the group made false accusations that he hasn’t paid his maid and was keeping her in Lebanon against her will when she stopped sending money home.

Yet according to Jean, she was doing so on her own volition, fearing that none would be left when she eventually returned.

“I’m sure that some people on this page are abusive, but I treat [my domestic worker] well,” Jean said. “This is not Lebanon. This is blackmail.”

For its part, This is Lebanon says has never made false accusations against employers. Uprety added that the group has achieved more justice than the Lebanese courts ever had, even if mistakes are made along the way.