Freedom United and allies bring Fashion Week protests to Europe - FreedomUnited.org
This website uses cookies to improve your experience. We'll assume you're ok with this, but you can opt-out if you wish.Accept Read More
Skip to content
Back to Global News 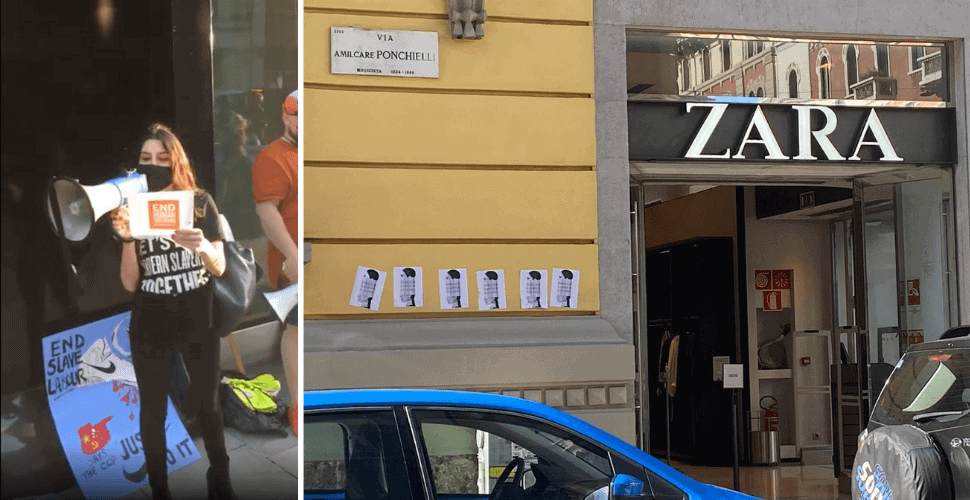 Following our demonstration at New York Fashion Week, Freedom United and our allies continued to protest the fashion industry’s links to forced Uyghur labor as Fashion Week shifted to London and Milan.

In London, Freedom United worked with our partner organization World Uyghur Congress (WUC) and the Uyghur Solidary Campaign to stage a protest outside Zara in Oxford Street on the first day of London Fashion Week.

“It’s our responsibility as consumers and activists to call on brands during Fashion Week and beyond and let them know that we will not tolerate a fashion industry propped up by forced labor,” said our Senior Advocacy Officer Miriam Karmali (pictured with megaphone), who represented Freedom United at the protest.

Rahima Mahmut, who has collaborated with Freedom United both personally and through her work with WUC, attended the protest draped in the East Turkestan flag and gave an impassioned speech.

“Fashion should be about making us more beautiful, but too many of the industry’s leading names are hiding an ugly secret. Many higher street names have suppliers profiting from the enslavement of Uyghurs,” declared Rahima.

On the last day of Milan Fashion Week, the city awoke to find Uyghur artist Yettesu’s striking graphics, which take aim at Nike, Uniqlo, and Zara, posted around the city center and outside implicated stores.

“Brands are knowingly supporting a system of repression perpetrated through internment camps and the genocide of the Uyghur People… we demand that implicated Italian brands, such as Zegna, take an immediate stance on the issue,” said Deborah Lucchetti, coordinator of Abiti Puliti, in their press release.

To round off the month of campaigning against the fashion industry’s links to forced Uyghur labor, Freedom United has now launched an action that allows our supporters to join the #ForcedLabourFashion movement themselves.

In addition to signing our 52,000-strong petition, supporters can now write directly to Nike, Uniqlo, and Zara and urge them to commit to exiting the Uyghur Region and ensuring they are not complicit in Uyghur forced labor.

Sign the petition and then take the further step of writing directly to brands.

You can watch our IGTV coverage of the London protest @freedomunitedHQ.

See where the Milan action was covered: