Freedom United, Uyghur groups, and models stage protest at New York Fashion Week - FreedomUnited.org
This website uses cookies to improve your experience. We'll assume you're ok with this, but you can opt-out if you wish.Accept Read More
Skip to content
Back to Global News 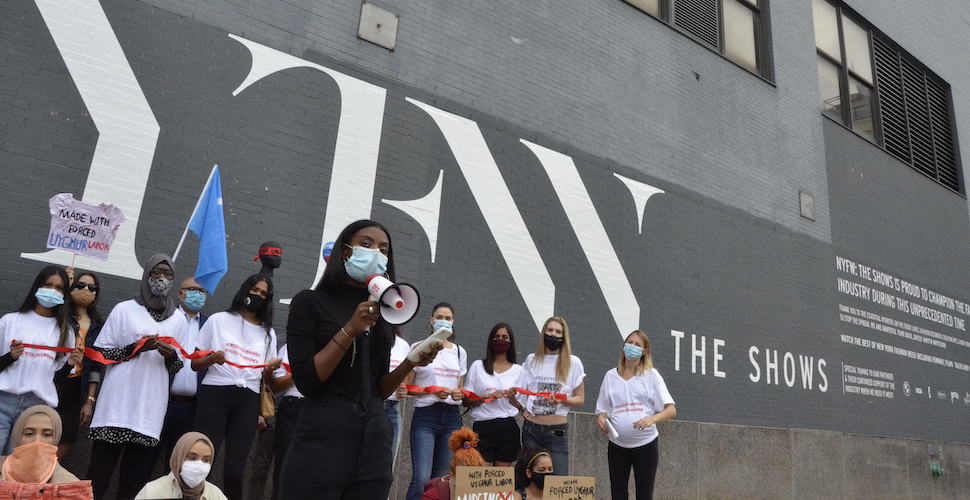 As New York Fashion Week kicked off on Sunday, Freedom United took the opportunity to protest the fashion industry’s links to forced labor in the Uyghur Region of northwest China.

In a demonstration outside Spring Studios in Manhattan, the week’s principal venue, model-activists took to a catwalk in white cotton t-shirts and red ribbon as campaigners raised signs and gave speeches.

The protest was co-organized with our partner organization Uyghur Human Rights Project (UHRP), along with the Model Alliance, the Campaign for Uyghurs, and the Free Uyghur Now student coalition.

“As consumers of these products we can no longer stand aside silently as millions are being exploited,” urged Advocacy Officer Herrana Addisu, who represented Freedom United at the event.

The protest marks the start of a new phase of campaigning tied to Fashion Week, which activists are using to draw attention to the complicity of global brands including Nike, Zara, and Uniqlo.

A fifth of the world’s cotton supply is estimated to come from the Uyghur Region, where people from Muslim and Turkic ethnic groups are being subjected en masse to numerous human rights abuses in addition to forced labor.

“Given that so much cotton is sourced from the Uyghur region, the fashion industry is uniquely culpable for forced labor, and by extension, systematic policies meant to destroy the Uyghur identity,” said Omer Kanat, director of UHRP. “Not only are brands like Nike, Zara, and Uniqlo enabling forced Uyghur labor, they’re also supporting an entire system of genocidal repression.”

Sara Ziff, Executive Director of the Model Alliance, told the story of Uyghur model Merdan Ghappar, who documented his 18-day imprisonment in one of the region’s many labor camps.

Acknowledging Ghappar’s bravery, Ziff called on the designers showing at New York Fashion Week to “speak beyond the craft” and to recognize the ongoing atrocities that taint their industry.

“Some of us questioned how our clothes had become so cheap, but the true cost and scale of exploitation has now been revealed—a whole swath of people from the Uyghur region used for their labor under threat and coercion to produce very cheap cotton—and it’s shocking,” said Joanna Ewart-James, Executive Director of Freedom United.

The #ForcedLabourFashion campaign is the latest development in a global movement that has seen the world slowly wake up to the reality of an entire industry potentially profiting from forced Uyghur labor.

The Coalition to End Forced Labor in the Uyghur Region, whose steering committee Freedom United sits on, launched in July with an urgent call on brands to exit the region.

Meanwhile, a new U.S. ban on Uyghur cotton came into force this week, further raising diplomatic pressure on China to put an end to the forced labor system.

New York is the first of four consecutive Fashion Weeks, and Sunday’s action will be followed by actions and press events in London, Paris, and Milan.

More than 45,000 have now added their name to Freedom United’s petition calling for an end to the Chinese government’s forced labor system.

You can watch our IGTV coverage of the event @freedomunitedHQ.

See where else the protest was covered: