Safe migration helps end human trafficking - FreedomUnited.org
This website uses cookies to improve your experience. We'll assume you're ok with this, but you can opt-out if you wish.Accept Read More
Skip to content 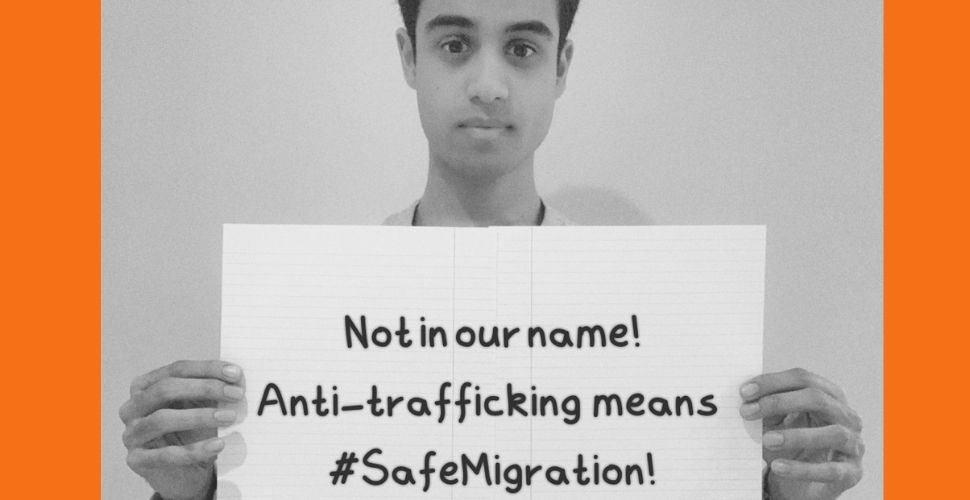 Around the world, a lack of safe migration routes combined with punitive immigration policies have contributed to increasing vulnerabilities to human trafficking and modern slavery for people on the move. Governments are using anti-trafficking rhetoric to justify these harmful policies. We say: not in our name!

Despite claims by governments1 that tighter border controls will prevent human trafficking, the opposite is true. Evidence shows that when people crossing borders are forced to take irregular routes, they are at greater risk of exploitation as a result of having to circumnavigate tightly restricted borders.

Governments around the world must stop using anti-trafficking rhetoric to promote support for harmful immigration policies that instead increase trafficking risks and undermine trafficking victims’ rights.

Hostile immigration policies perpetuate modern slavery and exploitation in various ways. For some, arriving in a new country through irregular routes is the only option available to build a better life or escape situations of persecution, violence and exploitation in their country of origin. This creates a point of vulnerability that traffickers can then exploit, knowing that people migrating through dangerous routes without the required legal documentation are unlikely to report exploitation to the authorities given their insecure immigration status. In Nepal for example, the government implemented a ban on domestic workers traveling to Gulf countries intended to protect them from exploitation. Instead, the ban only made the journey for Nepali women more dangerous.2

It also means that victims and potential victims of trafficking don’t feel safe approaching authorities for support because of the fear of being sent to immigration detention indefinitely – essentially prison – and of being deported right back into the conditions they were escaping in the first instance. The criminalization of sex work in large parts of the world also leaves workers who may be trafficked and exploited in this industry at risk of being deported, preventing them from seeking support. We’re urging states to acknowledge that a history of sex work should not be grounds for deportation.3

Migrants are not inherently vulnerable to trafficking. Rather, the policies that govern restrictive and hostile immigration systems around the world “increase migrants’ vulnerability and therefore their exploitability.”4 Evidence suggests that placing immigration restrictions on a person’s freedom of movement “[exacerbates] risks posed to migrants, to create zones of lawlessness and impunity at borders, and, ultimately, [is] ineffective,”5 producing the conditions that lead to exploitation and human trafficking. In the U.S., the ‘Remain in Mexico’ program prevents people migrating from central American countries from passing through the U.S.’s southwestern border. Instead, migrants are forced to remain in Mexico indefinitely to await immigration proceedings in conditions that have been shown to exacerbate trafficking.6

The fact is that people will always move – it’s human nature. So, it’s no wonder that freedom of movement is a human right enshrined in international law.7 The reasons why people move are endless, but the hostile nature of borders and punitive immigration policies fails to acknowledge the humanity of migrants and undermines the rights afforded to all of us through virtue of being human. In the vacuum of these rights, modern slavery and human trafficking are allowed to flourish.8

That’s why respect for human rights must be at the center of all border governance measures if states are to meet their obligations to prevent and protect against human trafficking, as outlined by the Office of the United Nations Commissioner for Human Rights (OHCHR).9 The OHCHR is explicit in its recommendation to states to follow guidelines on human rights at international borders, including ensuring that “irregular entry of migrants is not considered a criminal offence”10 and that “migrants should not be returned to situations of destitution or inhospitable conditions where their safety or human rights are threatened.”11

But not only are states ignoring these international recommendations, they are co-opting anti-trafficking arguments to justify restrictive immigration policies that are harming migrants and trafficking survivors.12 This is unacceptable.

The need for governments to prioritize safe migration is clear and urgent. At the end of 2020, UNHCR recorded 82.4 million forcibly displaced people worldwide “as a result of persecution, conflict, violence, human rights violations.”13 Without humane immigration policies that advocate for safe migration for all, tens of millions of people face being put at risk of human trafficking. As the International Centre for Migration Policy Development notes: “Every person has a right to seek asylum, but they do not necessarily have the possibility of travelling regularly and safely in order to reach the intended country of asylum, making them vulnerable to human trafficking.”14

Furthermore, the lack of safe migration routes cause people to take dangerous routes, putting their lives at risk.15 The situation for migrants in Libya, for example, is dire. Trapped in Libyan detention centers, thousands are facing abuse, forced labor, and other human rights violations.16 In 2021, over 32,000 people were intercepted in the Mediterranean making the perilous journey to Europe, many fleeing from unspeakable horrors in Libyan detention centers.17 But instead of taking them to a safe port, the E.U.-funded Libyan Coast Guard returned them to horrific conditions.18

The lack of safe routes to migrate, combined with a hostile reception and subsequent undocumented migration status, create the conditions for exploitation to thrive. Despite being a victim of trafficking, a person could still be detained under immigration powers and subsequently deported if they don’t have a secure immigration status. In the U.K. recently collected data shows how the numbers of trafficking survivors held in detention have steadily increased.19

Furthermore, tied visa systems for low-paid migrant workers such as the kafala system in the Middle East and the Overseas Domestic Worker visa system in the U.K.20 exemplify this constructed vulnerability to exploitation and abuse caused by restrictive immigration requirements. Under these systems, migrant workers’ immigration status is tied to their employer. Employers are secure in the knowledge that a worker cannot leave their employment without risking detention and deportation, and so an extreme power imbalance drives exploitative labor conditions while leaving migrant workers with little recourse to grievance and justice mechanisms.21

Governments also have a responsibility to regulate recruitment agencies to tackle unscrupulous labor recruitment. Workers dependent on third parties to secure employment opportunities abroad may be faced with little option but to pay huge fees to recruiters, a debt that they are then forced to pay off once in their destination country.22

The OHCHR’s Recommended Principles and Guidelines on Human Rights and Human Trafficking notes that “States and, where applicable, intergovernmental and non-governmental organizations should consider protecting the right of all persons to freedom of movement and ensuring that anti-trafficking measures do not infringe upon this right.”23

We must advocate for the dismantling of inhumane and violent immigration systems that play into the hands of traffickers and demand safe migration for all in line with international human rights standards.

Your government may pride itself on tackling modern slavery and human trafficking, but authorities around the world continue to pass harmful immigration legislation.  People are finding it harder to seek safety forcing them to accept offers from traffickers, and governments are knowingly detaining trafficking survivors in prison-like settings just for not having the right paperwork.

It’s time to call them out!

Though it may be convenient for governments to pin the blame for modern slavery on traffickers alone, we know that vulnerabilities to modern slavery are in fact perpetuated by our systems and are often a political choice. One of these systems that needs an immediate overhaul is our global approach to migration.

As the world’s largest community against modern slavery, we have the power to reject governments’ inhumane prioritization of criminalizing rather than protecting trafficking victims and to speak the truth loud and clear: safe migration for all is necessary to prevent and protect against human trafficking!

Migration numbers are bound to increase as parts of the world become uninhabitable as a result of climate change. We need to get rid of this fascist government and adopt a policy which is based on compassion and a willingness to help fellow human beings.

For far too long migration has been used as a political tool of the far right that has now become a problem in mainstream politics again.

Slavery in the modern age has taken many forms, all must be eradicated for the human race to live in a true free world, not the marketed free world, an actual free world.

Safe migration can help to reduce the risks of people being trafficked, for instance in my country those who always use unchartered routes to bordering countries doesn’t know of some regulations like the trafficking in persons labour migration which protects them from trafficking. with this low levels of awareness people discovers too late after being exploited.

If it gets them out of hell,perhaps ignorance is bliss.

Too often, anti-trafficking narratives are utilized to justify restrictive immigration policies that make it harder for people to cross borders. Evidence shows that when people crossing borders are forced to take irregular routes, they are at greater risk of exploitation as a result of having to circumnavigate tightly restricted borders. Furthermore, migrants who are subjected to restrictive immigration requirements that drive a worker/employer imbalance are at high risk of exploitation and abuse as a direct result.

I am calling on you to reject immigration policies that cause trafficking and pass immigration legislation that meets international human rights standards and empowers migrants and trafficking victims by providing safe migration routes.