Mobilizing consumers to push Boohoo to #GoTransparent - FreedomUnited.org
Skip to content
Back to Global News 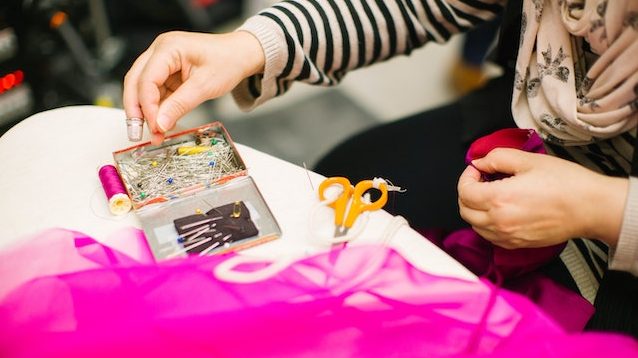 In recent weeks fast-fashion company Boohoo has come under fire for labor abuses allegedly occurring in their suppliers’ factories in Leicester, central England. The “Boohoo & COVID-19” report by Labour Behind the Label published in June 2020 and a subsequent investigation by the Sunday Times uncovered disturbing exploitation, including immigrant workers with symptoms of COVID-19 being forced to work or risk losing their jobs, as well as workers being paid just £3.50 an hour, well below the minimum wage in Britain of £8.72.

In Labour Behind the Label’s report, they point to abuses tantamount to modern slavery:

“Workers have reported concerns about a factory operating several sites, of which one employs around 30 workers from Eastern Europe. All these workers have been forced to continue working throughout lockdown and receive around £3–4 per hour. There is reportedly no social distancing, PPE provision or hand sanitizers for the workers. Most workers have little English and all are alleged to have their ID documents held by the employer.”

The backlash has been swift as Next, Asos, and Zalando dropped Boohoo and Standard Life Aberdeen, a major Boohoo shareholder, dumped nearly all of its shares in the company. Boohoo’s stock has tanked, dropping 23% and wiping £1 billion from the value of the company.

The UK government has promised to investigate abuses, with Home Office Secretary Priti Patel asking the National Crime Agency (NCA) to investigate modern slavery in Leicester’s clothing factories. The Gangmasters and Labour Abuse Authority has already visited Leicester textile factories and promises that “Further visits will be carried out in the coming weeks.”

The labor exploitation allegedly occurring in the factories of Boohoo suppliers is an issue all consumers should care about and understand in the context of fast-fashion, an industry bent on driving prices down, keeping labor costs low, and quick turnaround that puts tremendous pressure on low-wage, immigrant manufacturing workers to churn out garments.

While consumers may think that sweatshops are only a blight for developing countries, the case of Leicester shows that the hostile environment for immigrants in the UK drives workers into unsafe, potentially exploitative working conditions. Most of the factory workers in Leicester are immigrants from South Asia and observers say abuses have been an open secret for years.

Raj Mann, the police contact for Leicester’s Sikhs, explained that “The local authorities have known these sweatshops exist for decades but they’ve been loath to do anything about it for fear of being accused of picking on immigrant or refugee communities, as a lot of the exploited workers are of Indian background.”

As Sara Thornton, the UK’s independent anti-slavery commissioner noted, the pandemic is putting workers at risk of abuse. “As people have lost their jobs, they are increasingly desperate and will take exploitative work because at that point it’s the most rational option for them. On the other side is that if employers are feeling desperate about getting their businesses back on track, they might also feel that they want to cut corners.”

Labour Behind the Label’s report reiterates this point:

“The lack of documented resident status or entitlement to work means that many workers are willing to accept poor conditions in exchange for a job – even one without formal contracts or minimum wages. This also contributes to a situation where workers are unable or unwilling to speak out about labor rights abuses for fear of being deported or otherwise investigated.”

While the government investigations and NGO reports are critical and necessary steps, a key stakeholder has largely been left out of the conversation: the public. First and foremost, as consumers the public should not be left in the dark when it comes to Boohoo’s supply chain and labor practices in these factories.

This is precisely why Labour Behind the Label launched their #GoTransparent campaign, calling on Boohoo to publish their supply chain and tell the consumers about the working conditions and wages behind their low-cost clothing. In an Instagram post, Boohoo emphasized that “We are absolutely committed to improving transparency and sharing our findings with the relevant authorities” and that the company has already terminated its relationship with two suppliers.

But this is where Boohoo begins to down the wrong path. There is no language promising that the supplier list or working conditions would be made public for consumers to see, and cutting suppliers – a strategic PR move – ultimately hurts workers.

“When a brand cuts off a manufacturer, there are usually two outcomes,” explained Nigel Venes, strategic lead for apparel and textiles at the Ethical Trading Initiative (ETI). “Either a factory shuts and workers get laid off, or, as tends to happen, a factory closes then reopens under a different name. But protocols and conditions remain the same.”

In other words, dropping suppliers isn’t the solution; Boohoo needs to work with their factories to ensure employees’ labor rights are protected and that workers aren’t exploited during the COVID-19 pandemic and threatened with termination if they fall ill and can’t work.

Consumer outrage is understandable, but this needs to be channeled into applying public pressure to Boohoo to take positive steps rather than surface level promises and irresponsible actions like cutting off suppliers. When consumers called out Boohoo on Instagram for labor exploitation we were struck by the bizarre responses from the company, illustrating that they have yet to take consumers seriously. 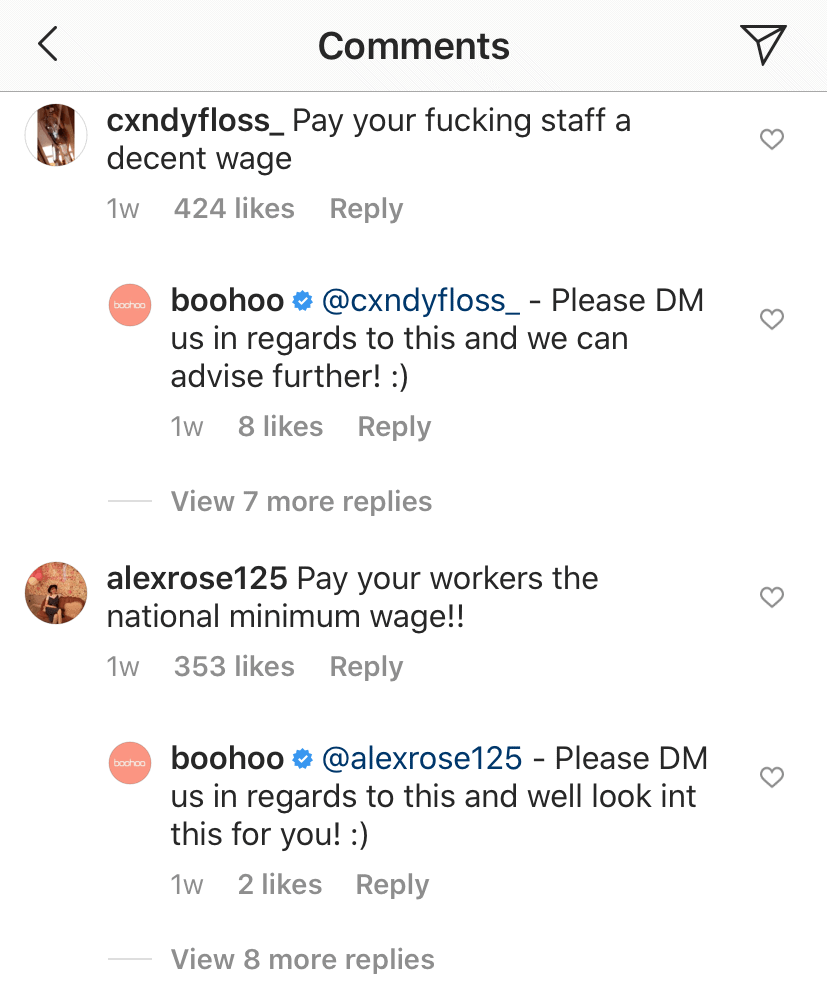 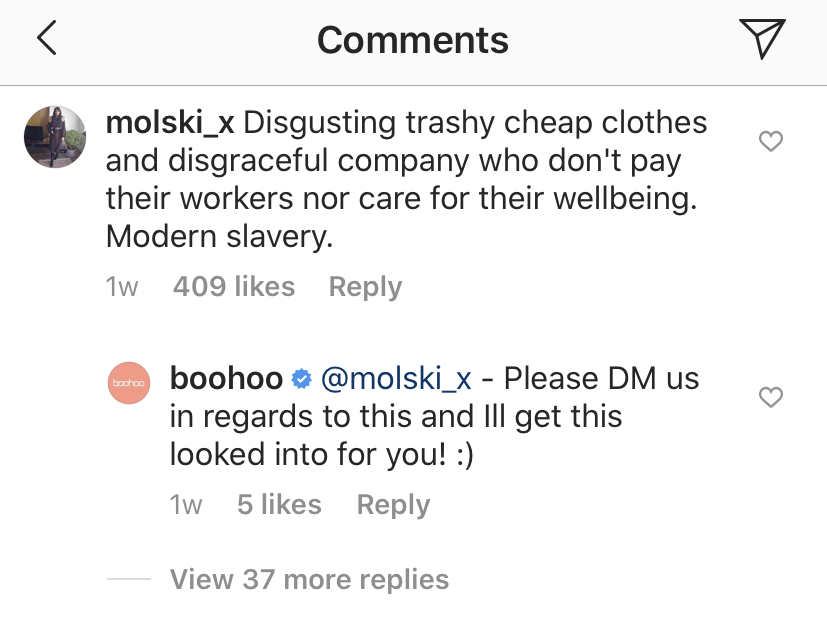 Freedom United, as the world’s largest anti-slavery community, aims to educate our followers to understand the contexts in which modern slavery occurs so that they can take informed, clear actions to demand action from companies like Boohoo and governments that fail to protect workers. Together, these collective actions demonstrate a united public front in combatting modern slavery, proving that tens of thousands of people will stand up for justice regardless of where it is happening in the world.

For example, Freedom United is part of the #LifttheBan coalition, demanding that the UK Home Secretary lift the rule barring refugees and asylum seekers – including victims of modern slavery – from working. Thus far we have collected over 93,000 signatures on our petition.

The lack of sustainable income is what drives these marginalized communities into jobs where they are subject to labor exploitation just in order to survive. While it is unclear from reports if any of the Leicester factory workers were asylum seekers, the parallels between undocumented immigrants and asylum seekers are striking. By taking up survival, albeit exploitative employment, these workers cannot speak out when their rights are violated for fear of being deported under the UK’s hostile environment.

Similarly, encouraging companies to make their supply chains public makes it easier for consumers to understand where their products are coming from and who is making them. For example, in 2018 we joined Traidcraft Exchange in calling for major UK tea companies to be transparent about their sourcing, successfully applying public pressure to get Twinings, Yorkshire Tea, Clipper, Unilever, Tetley, and Typhoo to answer the question “Who picked my tea?” This same logic of public mobilization applies to companies like Boohoo and other fast-fashion brands who have yet to tell us about labor conditions for manufacturing workers.

Ultimately, the public must be a key stakeholder in driving change because we hold purchasing power and are willing to make changes to our buying when companies fail to tackle modern slavery or be transparent. Companies shouldn’t just have to answer to shareholders and government investigations – they are obligated respond to consumers’ demands. If the saying “the customer is always right” holds any water, Boohoo and their peer companies would do well to listen to us. 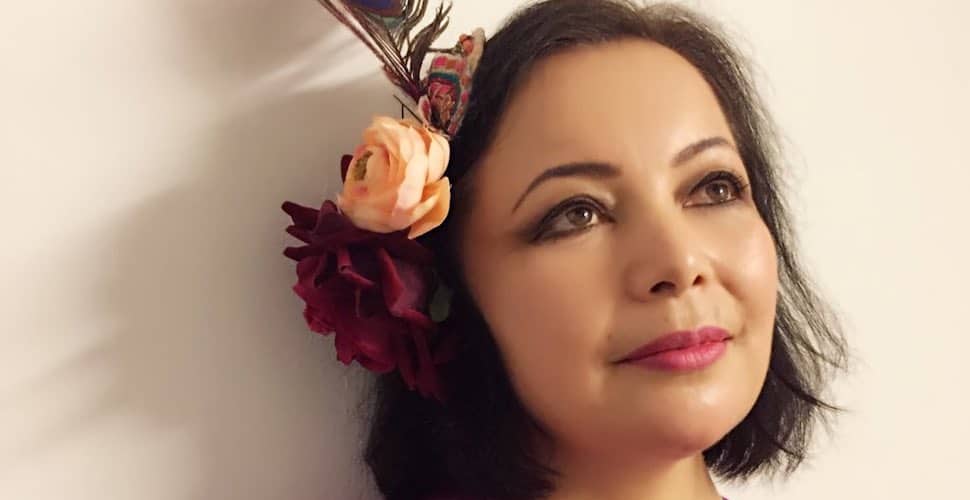 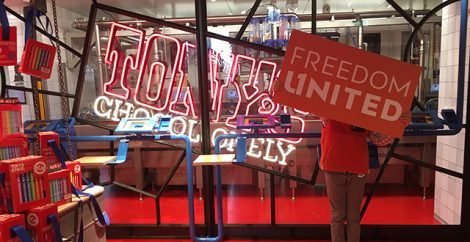