World Day Against Trafficking in Persons: Calling for an end to forced labor - FreedomUnited.org
This website uses cookies to improve your experience. We'll assume you're ok with this, but you can opt-out if you wish.Accept Read More
Skip to content
Back to Global News 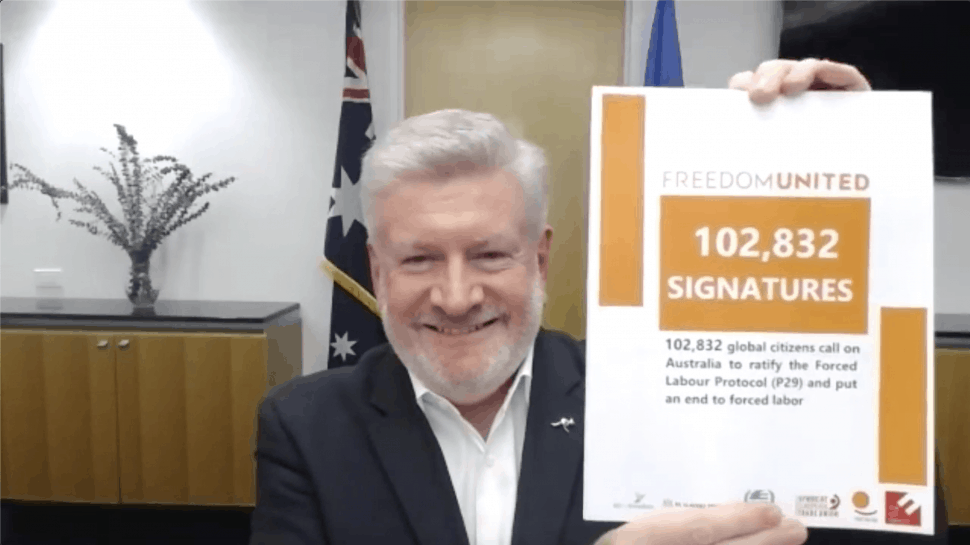 World Day Against Trafficking in Persons: Calling for an end to forced labor

UPDATE April 2022: Big news! Australia finally ratifies the Forced Labour Protocol. We handed in 100,000+ Freedom United petition signatures to Australia’s UN Ambassador Mitch Fifield and sent our petition to the Western Australian parliament. They have responded to our collective voice! Now the Forced Labour Protocol is signed, we look forward to the benefits of stronger protections.

On World Day Against Trafficking in Persons, members of the Freedom United community joined as we conducted our first-ever virtual petition hand-in. Together, we delivered over 100,000 signatures to the Australian Mission to the United Nations!

Freedom United has been working closely with our partner Be Slavery Free to push for the ratification of the ILO’s Forced Labour Protocol (P29) by the Australian government. Supplementing the Convention 29 of 1930, P29 is a legally-binding instrument that requires countries to adopt measures in the areas of prevention, protection of victims, and ensuring their access to justice and remedies.

This law holds governments accountable in creating domestic regulations to ensure workers are protected and are not being exploited, as well as making sure victims can get help, regardless of their immigration status.

“We are a federation…It is not just the commonwealth that needs to work on things, but it is also the states and territories that need to align their laws.” – Carolyn Kitto, Be Slavery Free

During the virtual event on July 30, Freedom United supporters who took action on our P29 campaign were invited to watch as their signatures were delivered to Australia’s Permanent Representative to the UN, calling on the government to ratify the Protocol.

By accepting our petition and call to action, we are asking Ambassador Mitch Fifield to support the ratification of Protocol 29 and help end forced labor in Australia.

Freedom United has been part of the ILO 50 for Freedom campaign to help support member states ratify P29. In partnership with the United Nation’s Association of New York, we have gathered over 100,000 signatures calling on governments to ratify the Protocol.

Since our partnership, we have joined forces with civil society organizations around the world to ensure governments are the world are implementing their commitment.

The event continues the series of bilateral and high-level meetings that Freedom United has held with key ILO member states.  You can watch the full petition hand in by clicking here!

Learn more and get the most recent updates from Freedom United by signing the petition at p29.org