So you’ve watched Seaspiracy — now what? - FreedomUnited.org
This website uses cookies to improve your experience. We'll assume you're ok with this, but you can opt-out if you wish.Accept Read More
Skip to content
Back to Global News
Tuesday April 20, 2021

So you’ve watched Seaspiracy — now what?

Boycotting fish may look like a simple answer, but it is too narrow a response to be an effective solution to the issues raised in the film

Audiences across the world have been rightfully shocked by Seaspiracy, Netflix’s new documentary from British director Ali Tabrizi, which highlights gross environmental and human rights abuses — including human trafficking — occurring in the global fishing industry.

From the killings of whales, dolphins, and sharks, scores of plastic fishing nets polluting the ocean, illegal fishing, the failure of certification stamps to guarantee protections, and fishermen trafficked onto fishing vessels, there is certainly no shortage of alarming problems facing the world’s fishing industry.

Yet as much as this film has brought much-needed public awareness about abuses in the fishing industry, the final call to action — the grand solution, so to speak — of consumers choosing to boycott fish isn’t quite the silver bullet to fixing these issues you might think it is.

The problems in the industry are complex, and not eating fish isn’t going to drive reforms (or take down the industry) by itself. Individual behavior must be linked directly to advocacy for reforms, and we must take a step back from the view that the Global North knows what’s best and recognize that the privilege of having the luxury of choice to boycott fish is not a reality for many in the Global South, particularly for coastal communities where local fishing is integral to their livelihoods and culture.

As with all of our advocacy, Freedom United operates independently, without business or government influence. We do not have any ties to fishing industry companies or receive money from them. We do, however, as we have done from our inception, put pressure on companies and governments to push for laws and policies that would protect fishers from conditions of modern slavery and labor exploitation at sea.

While many viewers of Seaspiracy expressed outrage and sadness over the graphic footage in the film, many others took issue with its sensationalism, orientalist framing, and lack of representation from local activists. As the Thai Enquirer reported:

While the film was only happy to point out the gross labor abuses that occur in Thailand and the developing world (with solemn narration and appropriate music) not once are locals consulted or featured on screen. . . This hasn’t been lost on movie critics around the world who have accused Tabrizi of ignoring local voices in the quest to push a narrative.

Several local NGOs and activists across the Global South have campaigned on environmental and human rights abuses — particularly forced labor — in the fishing industry for years. While some Thai survivors of human trafficking were interviewed, their brief testimonies were not given enough airtime to fully unpack the problem of severe labor exploitation and trafficking in the fishing industry at the global level. It’s here that we need to separate the environment from the human rights abuses in the industry and realize that there is no singular solution (i.e. not eating fish) that’s going to solve both simultaneously.

As an anti-trafficking organization, we’re not here to fact-check the claims Seaspiracy makes on the environment as it’s not our area of expertise. However, we do agree with certain points made, namely that certification schemes and the “sustainable” stamps on your canned tuna, just like any of the many other certification schemes, are no guarantee that the product isn’t linked to abuses.

Global fishing industry supply chains are too fractured, operating with inadequate oversight and responsibility, with seafood passing from ship to shore for processing in factories (where labor trafficking has been known to occur) before being shipped around the world.

On the question of boycotts: would a boycott of eating fish make a dent in the profitability of the fishing industry, thereby giving consumers the power to force them to change? Yes and no.

The responsibility of stopping human trafficking in the fishing industry shouldn’t rest on consumers’ shoulders alone — governments and companies should be doing the work themselves to address this before even allowing a product tainted by abuses to be brought to market.

There can be power in consumers choosing to not eat fish as long as that choice is linked to advocacy. In other words, boycotting fish won’t suddenly bring about reforms at companies or suddenly inspire governments to sign critical international laws to prevent trafficking, such as ILO Convention 188 on Work in Fishing.

Consumers putting economic pressure on the fishing industry is a lever to spur change — a boost of energy in the marathon — but it’s not what gets us over the finish line. Instead, a mass boycott could, in theory, lead to mass layoffs of low-wage fishers and seafood processing workers — putting them back into poverty and potentially making them more at-risk of trafficking — while company executives keep their jobs.

Boycotts, in this sense, are a blunt tool, but one that can be sharpened with targeted advocacy to protect workers’ rights (more on that later). If low-wage workers and fishers lose work due to a boycott or choose to leave the industry, they need to be able to transition into another sector.

Secondly, we cannot stress enough that the singular call for the entire world to stop eating fish is not an option for everyone and that we need to make a distinction between local fishers in coastal communities — particularly in the Global South — where fishing is integral to their livelihoods and culture, including indigenous fishing practices, and who are not contributing to the massive harms depicted in Seaspiracy by big industry players.

Many communities around the globe, and indeed here in Aotearoa, depend upon fishing to survive. Not everyone can afford to avoid seafood, and many of these communities don’t take more from the sea than they need. A blanket ban on eating fish would unfairly disadvantage these communities. It is industrialized fishing that’s the true evil here, not traditional harvesters taking what they need to feed their family.

Similarly, the Environmental Justice Foundation, one of the NGOs interviewed in the film, points out, “not everyone has the luxury of choosing their protein sources. Fish is actually one of the cheapest protein available in many regions including those under the poverty line.”

With this in mind, reflect on where you sit on this continuum of the privilege of choice and the options you have as a consumer where you live. For example, you may choose to stop eating fish sold by big industry companies, but when doing so, if you complement that decision with a letter to the companies and retailers you stop purchasing from explaining why you have made this change, that economic impact will be understood as a direct protest and call to change by the industry.

How migrant workers are the ignored victims

So what does that advocacy look like? For several years we’ve worked on addressing human trafficking in the global fishing industry through campaigns with local partners around the world. You can view these campaigns on our Slavery at Sea page. A key theme in our advocacy? Labor rights for fishers.

When we talk about reforming the fishing industry to ensure fishers, as well as seafood processing workers, have resilience against trafficking, it’s essential to look at what fishers and factory workers say they want. It’s not for the world to stop eating fish. It’s for expanded labor rights.

As Jennifer Rosenbaum from Global Labor Justice eloquently stated, “The opposite of trafficking isn’t no trafficking – it is the ability of migrants and workers to organize to demand their rights.”

Indeed, a core fact missing from Seaspiracy is that thousands of fishers in the industry are migrant workers, who on top of facing abuse at sea, can be trapped in debt bondage and trafficked onto vessels through unscrupulous or illegal recruitment agencies. Accordingly, addressing human trafficking in the fishing industry requires a multifaceted lens, one that recognizes the marginalization of workers due to factors including migration, socioeconomic class, nationality, language, and race.

For one, in many countries, migrant workers are barred from forming unions, putting them in a weaker negotiating position with companies, including those in the fishing industry. Fundamentally, fishers should not be limited in their right to advocate for themselves as they know best what working conditions are like and what needs to change.

Human trafficking and forced labor in the fishing industry are rightfully exposed by Seaspiracy. Boycotting fish may be the first step for some consumers, but ultimately, we need consumption to be linked to advocacy that will protect workers and fishers in the industry from trafficking, thereby building their resilience against exploitation. You can help make this a reality.

Ready to take action this Earth Day? Join our campaigns on the fishing industry and environmental protections

Who caught my fish?

Our allies at Advocates for Public Interest Law (APIL) in South Korea are currently campaigning for better protections for workers in the country’s fishing industry, including thousands of Indonesian and Vietnamese migrant workers. Their petition calls on the Minister of Oceans and Fisheries to ensure a fair minimum wage, regulation of working hours, prohibition of passport confiscation, a public recruitment process, and regulation of time at sea.

Call for laws that put people and the planet before profits

Freedom United is campaigning for mandatory human rights and environmental due diligence laws to require global companies to prevent and provide remedies for victims of abuse.

Freedom United along with our partners are calling for the world’s biggest chocolate companies to live up to their promise of ending child slavery and environmental damage in the West African cocoa sector. A key ask is ending deforestation across their value chains, a result of economic pressure on cocoa farmers to push deeper into West African forests.

One effective way of catalyzing action on this issue is to pressure multilateral and bilateral donors who fund Life Underwater-related (SDG #14 of Agenda 2030) projects. The Danish Institute of Human Rights and Sweden (SIDA) have teamed to make an impact with Human Rights in the fishery and aquaculture sectors. DIHR has developed an excellent tool The Human Rights Guide to the Sustainable Development Goals | Linking human rights with all Sustainable Development Goals and targets 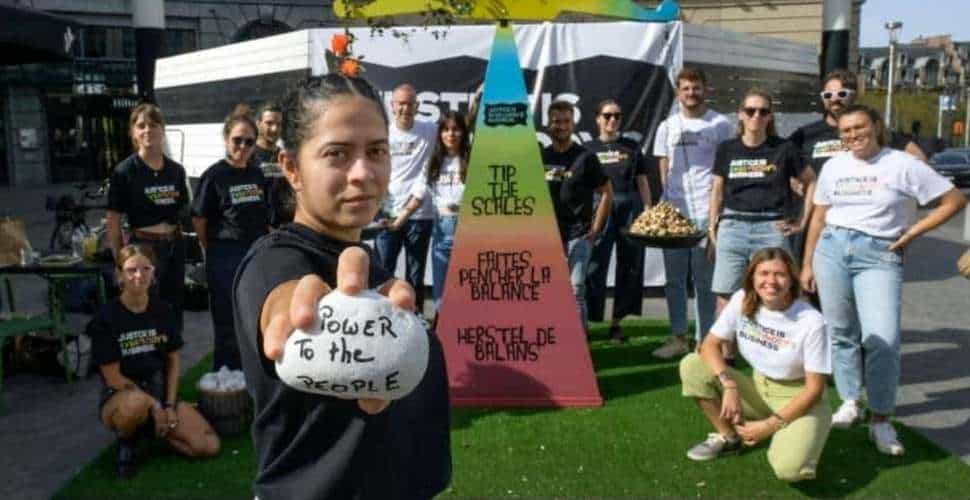 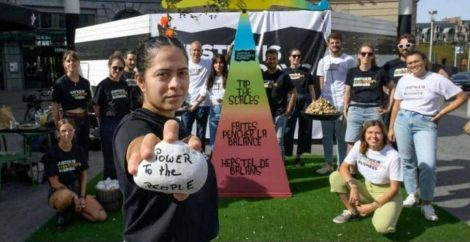