Six months after US import block against FGV, still no remediation for forced labor - FreedomUnited.org
This website uses cookies to improve your experience. We'll assume you're ok with this, but you can opt-out if you wish.Accept Read More
Skip to content
Back to Global News 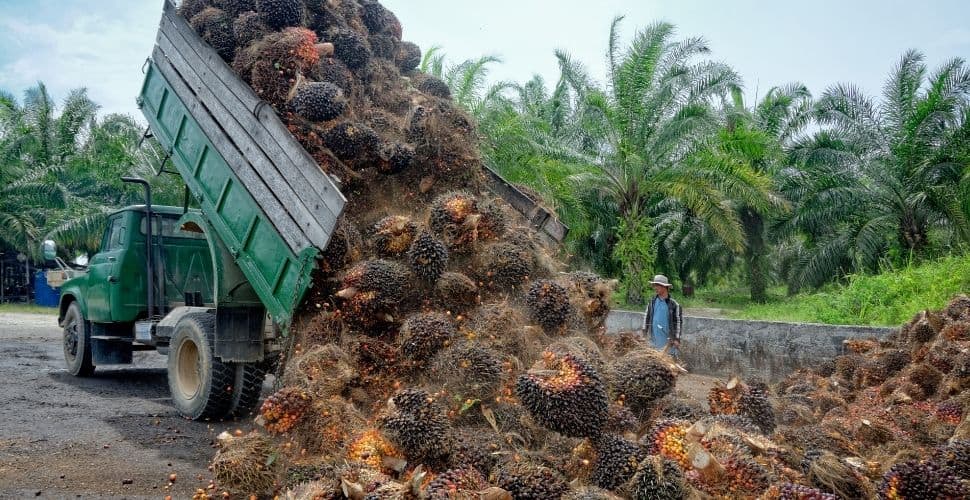 Six months after US import block against FGV, still no remediation for forced labor

For immediate release [Download as pdf for media contacts]

Based on this latest update from FLA, it is clear that FGV has been slow to implement meaningful reforms to improve labor conditions for workers on palm plantations and has strikingly failed to establish a remediation procedure for cases of forced labor — the very issue that resulted in a Withhold Release Order (WRO) being issued by US Customs and Border Protection against palm oil produced by FGV six months ago.

The withhold release order against FGV was issued on September 30, 2020, in response to a Tariff Act complaint filed by Global Labor Justice – International Labor Rights Forum (GLJ – ILRF), Rainforest Action Network, and SumofUs, and supported through a campaign by Freedom United. According to 19 U.S.C. §, 1307 imports produced by forced labor are to be blocked from the US.

The FLA report highlights several alarming findings, including evidence of passport retention — an indicator of potential forced labor according to the International Labour Organization — workers witnessing child labor, informal recruitment of workers, and CCTV cameras being pointed at passport “safety boxes” in order to surveil workers. Furthermore, one-third of workers reported needing to get a signed permission form from FGV in order to leave their estate. Workers lack training on labor rights, with 50% of workers saying they were not aware of their right to association, and workers do not use FGV’s grievance mechanisms because they don’t trust them. To date, zero migrant workers are members of unions despite their right to join them, and it is equally disturbing that FGV plans to select one worker and one union representative to join a committee of senior FGV staff. This directly undermines the right of workers to choose their own representation.

“Eliminating forced labor in supply chains requires respect for and upholding of fundamental rights of workers, especially the right to freedom of association and collective bargaining. It is alarming that no migrant workers are members of unions,” Esmeralda López, GLJ-ILRF’s Legal and Policy Director.

“Six months have passed since the WRO was issued against FGV. It is unacceptable that in this time FGV has yet to establish remedies for cases of forced labor and continues to deploy tactics seemingly to control their movements,” said Joanna Ewart-James, Executive Director of Freedom United.

On March 9, 2021, GLJ-ILRF, RAN, Freedom United, and SumofUs sent a letter to CBP with recommendations for enforcement of the WRO against FGV. As part of this letter, we flagged concerning new policies and programs targeting plantation workers introduced by the Malaysian government, including high fees and COVID-19 testing tied to the “Illegal Immigrant Recalibration Plan: Labour Recalibration Programme and Return Recalibration Programme.” In addition, in December 2020, Reuters reported that some palm oil workers were being pressured by employers to not return home, profiling one Indian worker on a Federal Land Development Authority (FELDA) plantation whose contract expired and wanted to go home due to illness. The new FLA report on FGV does not address either of these issues.

“FGV’s reckless behavior and unwillingness to remediate the forced labor conditions that have repeatedly been documented are only made possible by the silent complicity of the companies conducting business as usual with FGV. Consumers, shareholders, and workers from around the world demand Procter & Gamble, Nestlé, Mondelez, and the other buyers take responsibility and put pressure on FGV to uphold the fundamental rights of its workers”, said Fatah Sadaoui, campaigner at SumOfUs.

While the FLA update sheds some light on FGV’s actions over the past six months, it is notable that this assessment was done virtually due to COVID-19 restrictions. This means on-site plantation visits were not conducted by FLA, which potentially means some labor rights violations went undetected. We stress that future assessments must include on-site visits and that worker surveys and interview methodology be more transparent, ensuring that workers consent to speak on the condition of confidentiality or anonymity and that identifying information not be accessible by FGV so as to prevent retaliation. It is undeniable that FGV has multiple outstanding labor rights violations to address — namely the lack of forced labor remediation procedures — warranting continued enforcement of the WRO.