Acting against state imposed forced labor - FreedomUnited.org
This website uses cookies to improve your experience. We'll assume you're ok with this, but you can opt-out if you wish.Accept Read More
Skip to content
Back to Global News 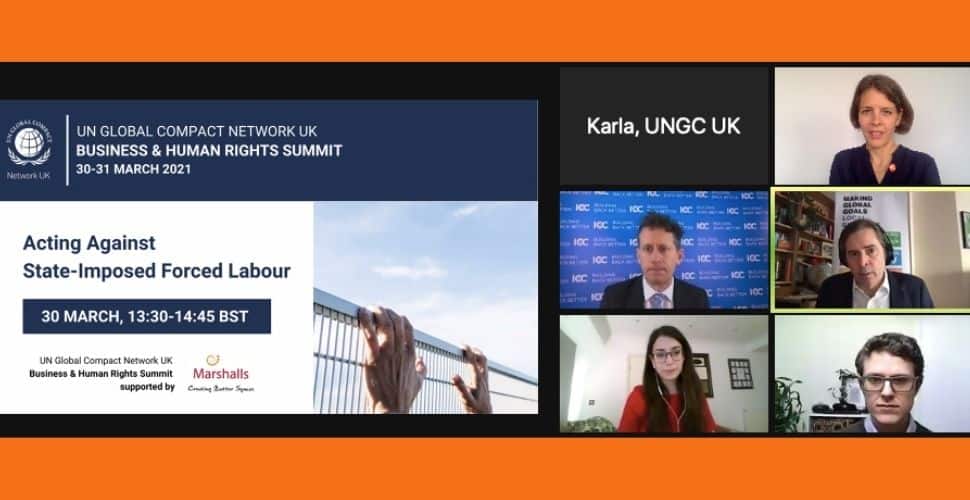 Freedom United’s Executive Director, Joanna Ewart-James, spoke at the UN Global Compact Network U.K.’s Business & Human Rights Summit 2021 where she explored how some forced labor systems are organized by governments, embedding forced labor into our economic systems and creating a dependency on exploitation.

Systems of state-imposed forced labor mean businesses can’t just rely on governments to respect human rights – businesses themselves must interrogate their supply chains and take responsibility for rights abuses. If you missed the event, you can read Joanna Ewart-James’ presentation below.

A lot of people think of modern slavery as distinct from historical slavery but sadly if we take a closer look, the links are unbroken. At the time slavery was abolished, the UN treaties were full of exceptions for slavery in colonies, showing just how important forced labor was to the global economy then, and this permissibility is still leant on by others today.

I am going to run through a couple of examples to show that instead of forced labor being only perpetrated by criminals, governments and many others are still benefiting from the exploitation of people under the menace of threat, penalty or punishment.

Today, the state-imposed forced labor of Uyghurs and other people in that region belonging to ethnic, cultural, and religious groups, by the government of China is much more well-known. We estimate that since 2017 over one million have been detained in so-called re-education camps, both inside and outside the Uyghur Region. In these camps they are forced to process cotton – the Uyghur Region makes up 84% of China’s supply – and manufacture garments and other goods.

Freedom United, as part of the Coalition to End Forced Labour in the Uyghur Region, is calling on brands to commit to exiting the region and remove their links to this system. The pressure is mounting with the Chinese government seeking to intimidate brands who have made statements denouncing this horrific system of abuse through commercial retaliation.

Of course, with a significant part of the economy built on exploitation, this change is going to hurt. It is absolutely crucial that companies do not bow to this bullying and threats.

With the long view of history – be it the apartheid system in South Africa or the Jewish holocaust, we know that an economic system sustained in this way can never be acceptable. Consumers do not want to buy clothes made on the back of genocide. This is a moral test. And it’s not the only example.

The Cotton Campaign has called for an end to the state-sponsored system of forced labor in Uzbekistan for over a decade. And we are starting to witness positive results. The government has since declared that forced labor is not acceptable, but dismantling a system that is so integrated into the economy is not easy.

There has however been a massive reduction in the numbers mobilized in recent years. A significant drop in the latest harvest, ironically, is in part due to the pandemic preventing workers taking better opportunities abroad, but also because pay for cotton pickers has been increased.

However, some regional government officials in some regions are still forcibly mobilizing employees of public enterprises, organizations, banks and emergency services.

We are yet to witness similar progress in Turkmenistan, also a significant producer of cotton. Analysis of the 2020 harvest showed that forcibly mobilizing public sector employees, conscripts, and students was endemic. Penalties ranged from being threatened with dismissal, to disciplinaries or expulsion from schools and colleges.

Cotton from Turkmenistan is exported around the world to enter global supply chains. It’s believed to account for about 15% of cotton imported into Turkey, a country that exported almost 15 billion euros worth of textiles and textile products to the E.U. in 2018.

If you’re sourcing from Turkey, you need to investigate and interrogate the origin of the cotton in your products to be sure that you’re not inadvertently complicit in state-imposed forced labor.

This just leaves time for me to make mention of our efforts to end the system of forced conscript labor in Eritrea. The peace agreement signed with Ethiopia in 2018 has done little to curtail the government’s use of indefinite forced conscription into the military.

With little fighting to do, the government has found great profit in fielding out conscripts to economic sectors ranging from construction, agriculture or even projects with substantial foreign investments. Then-Canadian mining firm Nevsun Resources Ltd who, together with a state enterprise established the Bisha mine, benefited from the use of forced conscript labor.

A case brought by victims settled in a Canadian court for an undisclosed sum last year highlights that whilst in countries where this practice is not just tolerated but actually imposed, it does not make it acceptable or right, or give cover from international standards.

To conclude, I call on you to learn more about what’s happening, on freedomunited.org and other sources, and take a closer look at your risk assessments and make sure you or your business is not benefiting from state-imposed forced labor.

I am almost out of time, but sadly not out of examples of how respectable business may be linked to state-imposed forced labor. North Korean workers have been shipped by their governments to companies around the world to bring in much needed hard currency.

Details of the extent of this practice are hard to come by but research has revealed the scale is global – from tomato farms and shipyards in Poland, to shoe-making and textiles in the Czech Republic, across Russia and reaching several countries on the African continent.

Sadly, relying on the state’s responsibility to respect human rights is wholly inadequate for businesses to ensure that they are respecting human rights.

Don’t forget to mention prison labour in the United States.