Would You Help a Trafficked Undocumented Migrant? - FreedomUnited.org
This website uses cookies to improve your experience. We'll assume you're ok with this, but you can opt-out if you wish.Accept Read More
Skip to content
Back to Global News 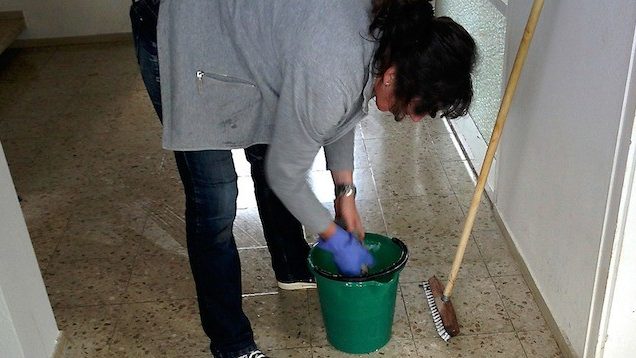 Would You Help a Trafficked Undocumented Migrant?

Would you help an undocumented migrant if you suspected that she was a victim of human trafficking?

That’s the question a new comic strip urges the American public to consider. It’s the second in a series called “Wolves in the Street” by Dan Goldman and anti-trafficking group UNITAS, which explores how the public chooses to help — or ignore — the plight of a young woman in the United States.

In the story, the parents of a girl named Lucinda from Ciudad Juarez in northern Mexico arrange for her to go to the United States to escape threats of violence at home.

Yet things do not go as planned when she arrived in the US. Thomson Reuters Foundation reports:

A people smuggler takes her across the border to the home of a neighbor’s aunt, but instead of being sent to school, she is made to work long hours cleaning office buildings and told she owes the aunt more than $6,000.

In the first version of the comic, a woman working late who notices Lucinda thinks something might be wrong but gets distracted by work and does nothing.

In the second version, the same employee calls a trafficking hotline and Lucinda is helped to freedom, and granted a special visa allowing her to stay in the United States.

“Any time that there are individuals who are brought to this country and then subsequently exploited, it’s all of our responsibility to see them,” Andrea Powell, a UNITAS board member, told the Thomson Reuters Foundation.

“To treat them as real survivors and not individuals who just need to be picked up and deported.”

Lucinda’s story is based on a real trafficking survivor’s tale of being rescued and granted a special “T” visa for victims of human trafficking.

However, last year President Trump ordered a crackdown on anyone who is denied a special visa for trafficking victims. If they are not granted a “T” visa, they must show up in immigration court to begin deportation hearings.

Is there no end to Trump’s horrid conduct IF you are not “white”!

Get rid of the president, keep the visa.

no, I wouldn’t help–why are they undocumented and still here?

This is a hard question to answer as I would no against the law but if required I would try to get help. These people are in a terrible position but at 72 and in poor health I would not be in a position to offer direct help. There are many displaced people all over the world and all countries should be working together to find an answer to their plight. As I’ve said within the law I would do what I could.

Age should never be an issue. “Help” can mean contacting a group that helps victims of trafficking.
I favor following the law, but not when it punishes the victim.