Thai Mother Suspects Foul Play in Rescued Daughter's 'Suicide' - FreedomUnited.org
This website uses cookies to improve your experience. We'll assume you're ok with this, but you can opt-out if you wish.Accept Read More
Skip to content
Back to Global News 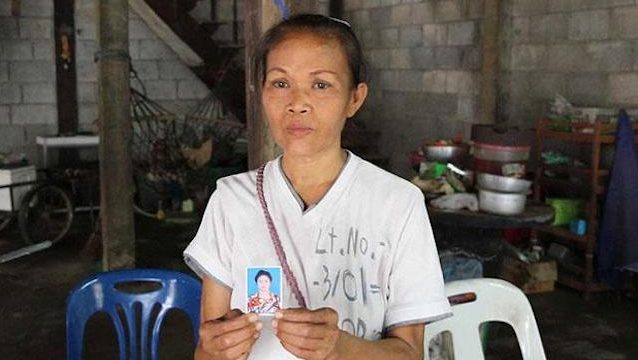 The mother of a 26-year-old Thai woman who hanged herself after being rescued from forced sex work in Malaysia is calling on authorities to launch an investigation into her daughter’s death.

Jandee Boonbandong sought the help of provincial labor agencies after she was told her daughter, Thanya Kongpeera, had committed suicide in Kota Kinabalu, Malaysia.

Boonbandong explained that her daughter had told her that she was going to work as a waitress in South Korea, earning 70,000 baht a month. She had been in contact on Facebook with an agent named Daranibong Nurainee who promised her that travel and other expenses would be covered.

However, upon meeting the agent, Thanya was told that she would be a waitress at a Thai restaurant in Malaysia. Her family warned her that she could be duped into an illegal job abroad, but Thanya still went to Malaysia.

[Thanya] later called Ms Jandee from Malaysia, saying did have a waitressing job at a restaurant, but she was also being forced to work as a prostitute.

“Nong Ple (her nickname) refused to work as a prostitute so she was locked up in a room upstairs at the restaurant. She was left without food and water for many days,” her mother said.

Thanya then contacted her relatives and friends, saying she was forced into prostitution. She also asked her mother to wire money to the agent’s bank account to secure her freedom, but Ms Jandee said the family was too poor and did not have the money.

The family then sought help from Thai authorities, which contacted the Thai embassy in Kuala Lumpur, resulting in the rescue of Thanya and two other Thai women from the brothel.

After the rescue, Thanya called her mother saying she would return home soon.

She never did. Malaysian police told the Thai embassy that Thanya hanged herself inside an emergency shelter in Kota Kinabalu.

Her mother suspects that foul play was involved in Thanya’s death, explaining that her daughter had never wanted to die and talked about coming home.

Khon Kaen governor Somsak Jangtrakul said he had instructed the Provincial Social Development and Human Security Office to investigate who recruited Thanya to go to Malaysia.

“If the case is linked to human trafficking, a thorough investigation must be made to provide full assistance for the victim’s family,” he said.