Survivors & Freedom United Deliver Petition to 10 Downing Street - FreedomUnited.org
This website uses cookies to improve your experience. We'll assume you're ok with this, but you can opt-out if you wish.Accept Read More
Skip to content
Back to Global News 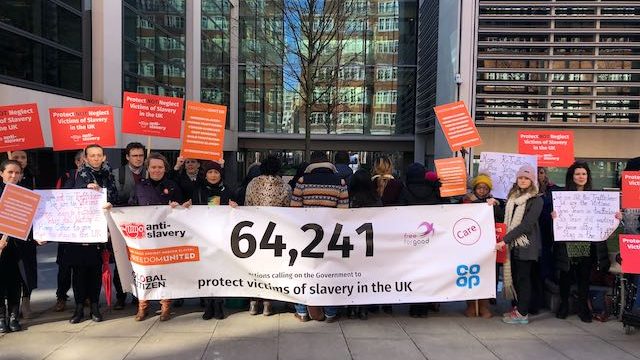 Rallying in front of the Home Office, where some supporters symbolically turned their backs to show that survivors are unable to live normal lives without adequate government support.

Survivors of modern slavery and a coalition of anti-trafficking organizations, including Freedom United, are delivering a petition with more than 60,000 messages to 10 Downing Street today, demanding that the UK government back a law to expand support for victims.

The proposed bill — the UK Victim Support Bill — would guarantee that survivors receive help accessing housing and healthcare, as well as allow foreign victims to stay in Britain for year while they get back on their feet.

Currently, the government only gives foreign victims 45 days to remain in the country. Yet campaigners point out that this is far too short of a recovery period and risks deporting victims back to the very countries from which they were trafficked.

“Together with tens of thousands of messages of solidarity from Freedom United supporters and others, we are asking why the government’s pledge to tackle slavery isn’t backed up with the care needed for survivors to recover?”

The bill was put forward by parliament’s unelected upper chamber in 2017 but is now in limbo in the lower house, said Gleich, a policy expert, who urged the government to ensure it is debated rather than letting it drop off the radar for good.

Several activists told the Thomson Reuters Foundation that they believe the government fears allowing slavery victims to stay in Britain for a year because this could attract more migrants to the country as it cracks down on immigration.

“The government has done a lot to tackle modern slavery in recent years, but unfortunately the focus on supporting the victims of this heinous crime has been missing,” said Anna Sereni, a researcher with Anti-Slavery International.

“As a result, survivors get caught up in a system that is ineffective at best and all too often outright hostile to them.”

At least 7,000 suspected victims of modern slavery were identified last year, marking a third of an increase from 2017, and both survivors and activists are concerned the government is not ready to assist the growing number of victims.

“Providing victims with adequate support is not just the right thing to do for their recovery, it is also essential if we are to bring traffickers to justice and prevent them exploiting others in the future,” said Louise Gleich of the charity CARE.

“Without protection, support and stability, victims cannot give evidence to police and courts meaning traffickers go free and the cycle of exploitation continues.”

Jon Olsen mentioned on his reply the old excuse of foreign policies, especially those of the US as the main cause of the heavily oppressed societies where trafficked people come from and that’s misleading to say the less.
Those foreign policies were never imposed on those countries. They decided to accept them via the dictator or other corrupted people in charge. Those people are their people, not ours and they were put in charge or accepted/tolerated by them, not by us.

As someone who works directly with survivors of modern slavery, I can see the need to increase the support in order for them to get back on the feet. At present the 45 day recovery period is not accurate, trafficking decision are taking much longer to be decided, meaning that individuals in support are left in a limbo and insecurity about when the support will end. It’s important to note that support looks very different for those seeking asylum and those from the UE.

“Providing victims with adequate support is not just the right thing to do for their recovery, it is also essential if we are to bring traffickers to justice and prevent them exploiting others in the future,” said Louise Gleich of the charity CARE.

I thought that supporting victims of slavery was not a free pass to stay in the countries they were trafficked to but just to be freed. I can see now that this proposed bill is just one of the many attempts to allow people who shouldn’t be here in the first place, to stay in this country for good.
If I’ve got this right I wish to express my disappointment for your proposal.

So, you want to send them back to slavery? is that your solution?

And what’s yours instead? Bringing here every slave in the planet? It’s unfair that only those who were brought here were able to stay. What about the endless other who are enslaved and even in worst ways in their own countries?

OK, since you asked. I would give temporary asylum to these people and work hard to reverse the atrocious foreign policies that drove them here from heavily oppressed societies, aided by the US imperial juggernaut. When conditions are good at home, they will want to return, or at that point, when they no longer need to fear for their lives, deportation can be an option.

That’s not what has been happening for ages, maybe it has never happened. Temporary asylum is something unheard of. On the opposite, refugees never go back home for good (only for holidays despite their allegation of fearing for their lives) and moreover they bring as many relatives as they can (chain migration).
Refugees don’t give a damn about the societies they come from otherwise they would return en masse once condition are more favourable. All they care is to live like us in the west.