Rehab Patients Forced into Unpaid Labor to Cover “Treatment” - FreedomUnited.org
This website uses cookies to improve your experience. We'll assume you're ok with this, but you can opt-out if you wish.Accept Read More
Skip to content
Back to Global News 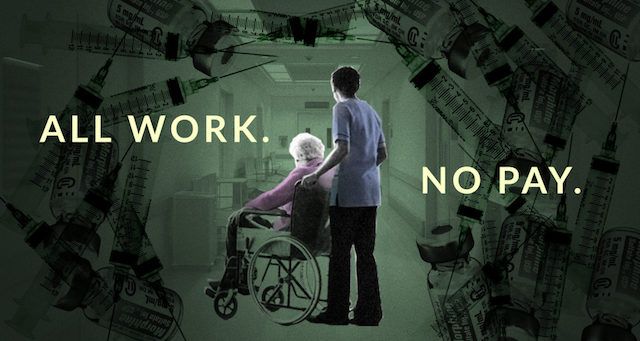 Jennifer Warren spent years recruiting desperate people for her drug rehabilitation program, Recovery Connections Community, in the mountains outside of Asheville, North Carolina. She promised to free them from addiction through counseling at no-cost.

Instead, untrained rehab patients were thrust into adult care homes for the elderly and disabled, working 16 hours a day for no pay. They did everything from change diapers, bathe patients, and even dispense prescription medications — including those they themselves were addicted to. Some caved in, snorting prescription pain meds and even swallowing drops of morphine from syringes.

Speak up for victims of forced labor in the U.S.

Alarmingly, at least seven rehab patients were also accused of assaulting seniors in care homes. “There’s a whole lot in the program that’s covered up,” said Charles Polk, who went through Warren’s program. “The only thing she thinks about is the money.”

Amid a nationwide opioid epidemic, treatment remains out of grasp for most people struggling with addiction. Those with wealth and insurance often are able to pay thousands of dollars for private long-term programs. But the less fortunate have become easy prey for rehabs with a tantalizing promise: freedom from addiction for free.

To pay for their stay, participants must work full-time jobs and surrender their pay. An ongoing investigation by Reveal from The Center for Investigative Reporting has found that many programs exploit this arrangement, providing few actual services while turning participants into indentured servants.

In North Carolina, Warren has turned her nonprofit rehabilitation program into her personal empire. She worked the people in her program to exhaustion, while regularly vacationing in places such as Paris, Greece and New Orleans for Mardi Gras, according to former participants and state records. She diverted nonprofit donations meant for the program – appointments at beauty salons and concert tickets – to herself and used participants’ food stamps to stock her own kitchen.

Denise Cool, who was addicted to cocaine when a judge sent her to Warren’s rehab program in 2011 said, “It’s like slavery, like we were on the plantation.”

In one case a rehab patient — who was not trained to dispense prescription drugs — nearly killed a elderly resident who began gasping for air and vomiting after he gave her the wrong medication.

Under North Carolina law, personal care aides at care homes must receive at least 80 hours of training. Dispensing meds requires a special certificate as well. Rehab workers at Warren’s program received neither of these things.

Warren was stripped form her counseling license in 2012, but continued to operate the program despite complaints filed with state agencies. Authorities have now begun to investigate the abuses since Reveal began asking questions about the program.

However, in light of complaints, earlier this month the North Carolina Department of Public Safety issued a memo stating “We have determined that the Recovery Connections locations do not align with our mission, vision, or goals.” As a result, probationers will not be allowed there.

Yet there are hospitals and social workers that still continue to send patients to Warren’s program when they have nowhere else to go.

Join our call to end forced labor in U.S. detention.

That’s North Carolina for you. Scratch the surface and you’ll find all kinds of ugliness.

It’s not only North Carolina!!! I was hired as a Supervisor of Case Management for an agency in Oklahoma that did the exact same thing!!! I quit after finding that they violated every ethics class that I’ve ever taken!!! They dodged the state also by characterizing themselves as a 12-step program. I’m praying that they all get shut down because it’s not about the patients anymore….It’s about that bottom dollar!!!

This is unbelievable cruel!!!

This is more than unbelievable