Outrage as Saudis Secretly Execute Indonesian Worker - FreedomUnited.org
This website uses cookies to improve your experience. We'll assume you're ok with this, but you can opt-out if you wish.Accept Read More
Skip to content
Back to Global News 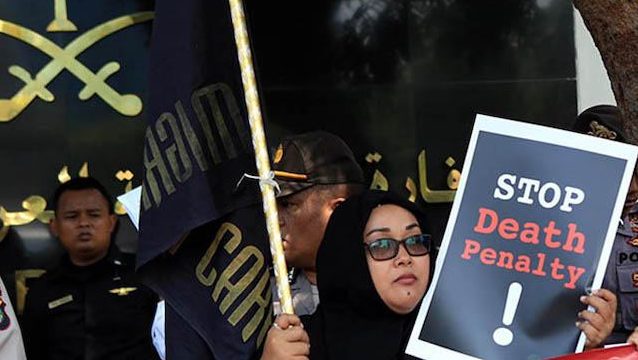 Migrant Care activists hold a rally in protest against the execution of an Indonesian migrant worker in front of the Saudi Arabia Embassy in Jakarta. Photo credit: Seto Wardhana/Jakarta Post

Shockingly, Saudi Arabia did not notify Tursilawati’s family or Indonesian officials about the execution.

Tursilawati had been sentenced to death in Saudi Arabia for allegedly beating her employer to death with a stick in self-defense against attempted rape.

She managed to run away, but was then raped instead by nine Saudi men before the police brought her into custody.

Her execution and the ensuring diplomatic row is now sparking calls for Jakarta to scrap a workers’ deal it has with Riyadh.

“President Jokowi must cancel the agreement between Indonesia and Saudi Arabia on the One Channel System [because the execution is] proof that Saudi Arabia does not fulfill the terms and conditions pertaining to the protection of the rights of migrant domestic workers,” Wahyu said in a statement.

The assured protection of migrant workers’ rights was an explicit requirement in documents signed by Manpower Minister Hanif Dhakiri and his Saudi counterpart Ahmed Sulaiman Al Rajhi on October 11, the rights activist said.

The One Channel System was a scheme agreed upon by the labour ministers that would allow Indonesia to send a certain number of workers to the Middle Eastern kingdom, bypassing a 2015 moratorium.

The problem has become so severe that during a recent joint commission meeting between Indonesia and Saudi Arabia, Indonesian Foreign Minister Retno Marsudi requested the Saudis to provide consular notifications in accordance with the 1963 Vienna Convention on consular relations.

“When [President Jokowi] met with the Saudi foreign minister, the President asked Saudi Arabia to provide protection for Indonesian migrant workers and work to resolve the [murder of journalist Jamal] Khashoggi in earnest.”

“It turns out the request was simply ignored.”

The trouble some muslim countries punish the woman for ALLOWING herself to be raped not the man who raped her as if she asked for it ?

Unfortunately they won’t give a damn about the protests. These people are ruthless and it’s only by bringing down this regime of corrupt aristocrates and fanatic clerics that we might get an open way to change.

I agree 100%. The Saudis sponsored Osama Bin Lauden and we are their ally? Now, they treat women like diret, this has to stop!!!!!! omen have a right to defend themselves against rape or othr agresions!!!

Surely now it is the time to stop all trade with the Saudis. If this is about keeping a British role out there then we have clearly missed the boat. The world must be engaged – and enraged – and galvanised to outlaw this country whose rulers seem to to want to outlaw themselves, and maintain the statues quo at all all costs. The problem is – just how to engage the ear of a nation whose rulers just refuse to listen. An appropriate thought as we come to Remembrance Weekend.

What hell this girl went through in this place. Surely they will stop migrating to Saudi Arabia and other such places where an underworld patriarchy is in charge of such obscene misogyny. Not even a Cave Age culture would ever allow itself to be so disgraced with any such sub-human creatures in their midst.

It’s bad enough that this poor woman was gang-raped. But to behead her as well!! Her blood is on their hands. Savages.