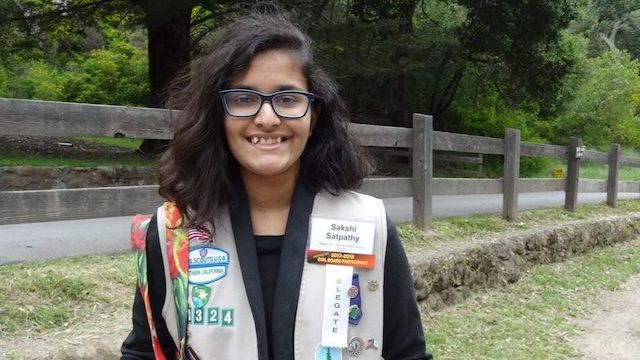 Sakshi Satpathy was one of 10 young women to receive the 2018 National Gold Award from Girl Scouts of the USA. Satpathy has created Project GREET to combat human trafficking and child marriage. Photo credit: GREET
Wednesday October 31, 2018

Inspiring Indian-American teenager Sakshi Satpathy has been named as one of ten 2018 National Gold Award winners from Girl Scouts of the USA for her efforts to counter human trafficking and child marriage.

Satpathy, a high school senior from Palo Alto, California,  is the founder of Project GREET — Girl Rights: Engage, Empower, Train — and has designed, created, and distributed documentary films, a training curriculum, a website, and a YouTube playlist to educate the public about human trafficking.

Incredibly, her films have already been screened in 59 locations in 15 countries and her training curriculum, “Guidelines to Rehabilitate Young Trafficked Girls,” is being used by activists and vocational training programs.

She even had the opportunity to present the GREET project at the United Nations’ 62nd Commission on the Status of Women.

“Through my work with Amnesty International, and through facts I have heard about forced child marriages and girls being trafficked, I understood deeply how the two vile practices directly violate girls’ rights,” said the young student in an interview posted to the Girl Scouts of the USA Website.

“However, most individuals cannot relate to these issues. I strongly believe that almost every social injustice or global issue disproportionately hurts women and girls,” said Satpathy.

Satpathy said her experience in establishing Project GREET has taught her new technical skills like website building, movie making, and video editing, and improved research skills, as well as becoming an expert on trafficking, child marriage and gender inequity.

Satpathy added that she has her sights on several social and environmental justice issues.

“As a future leader, I hope to become more compassionate and gain greater perspective from others to tackle pressing global issues such as climate change, lacking representation of women and minorities, war and poverty, unscrupulous business practices, and social evils beyond trafficking and child marriage,” she said.

Sakshi Satpathy is a great girl. I hope their governor gets to hear of this.