Nobel Prize Winner Convinces France to Aid Yazidis - FreedomUnited.org
This website uses cookies to improve your experience. We'll assume you're ok with this, but you can opt-out if you wish.Accept Read More
Skip to content
Back to Global News 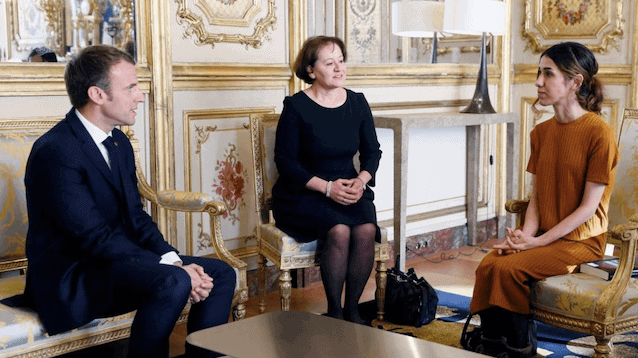 France has agreed to take in 100 Yazidi women who were formerly held as sex slaves by ISIS militants and who are now living in refugee camps in the Kurdish region of northern Iraq.

The decision follows a high-profile meeting between French President Emmanuel Macron and 2018 Nobel Peace Prize winner Nadia Murad —herself a survivor of sex trafficking at the hands of ISIS.

Related Campaign: Join the fight for freedom for girls.

After being raped and tortured by ISIS, Murad escaped and has campaigned to bring the world’s attention to the plight of her fellow Yazidis.

French President Emmanuel Macron and Murad met in Paris on Thursday, and he said afterward that 20 women are expected to be taken in by France this year and the rest in 2019.

In a statement, he said he commended her fight for survivors of sexual, ethnic and religious violence.

“Awards like the Nobel Peace Prize help to put these connections at the forefront of the global news agenda,” said Brita Fernandez Schmidt, head of Women for Women International, a non-profit group that supports survivors of conflict, including Yazidi women in Iraq.

“On the global level, her focusing attention on the issues of sexual violence in conflict will hopefully help Yazidi women move forward and give them the help they need,” said Schmidt.

Murad’s campaigning efforts have brought her to speak to the United Nations Security Council and governments around the world.

In addition to winning the Nobel Prize, Murad has also been appointed a U.N. Goodwill Ambassador and written a book entitled “The Last Girl” about her experience.

“She has been a leader fighting for Yazidis for more than four years. Attention has been paid, which is great, and people are listening,” said Ahmed Khudida Burjus of Yazda, a charity that helps survivors, and director of Nadia Murad’s Initiative, a group that works with Murad.

“There is real change happening because of Nadia’s strength in fighting for Yazidi women and the community,” he added.

“She is something incredible.”

Why hasn’t the UK done anything for the Yazidis, I have been advocating this for over 4 years, we to our eternal shame have done nothing,