Freedom United and over 190 organizations call on fashion brands to exit Uyghur Region - FreedomUnited.org
This website uses cookies to improve your experience. We'll assume you're ok with this, but you can opt-out if you wish.Accept Read More
Skip to content
Back to Global News 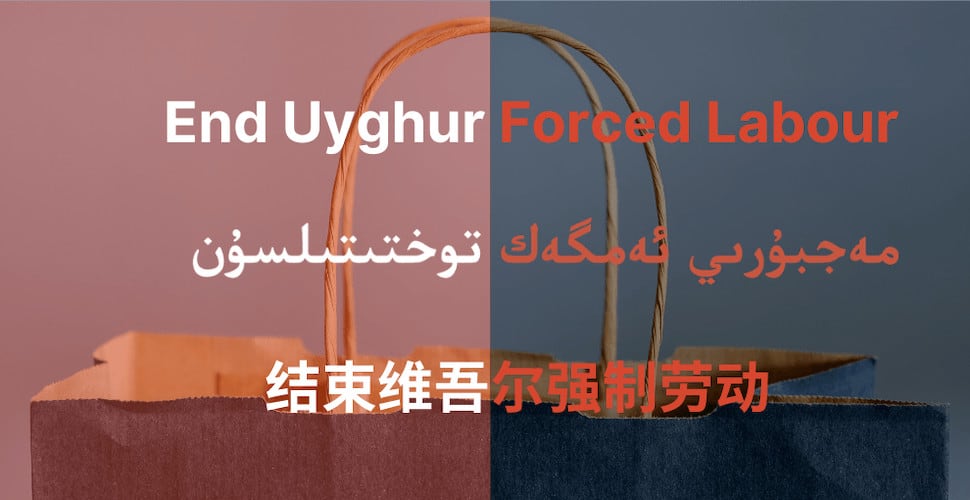 A new coalition of over 190 organizations from over 36 different countries, including Freedom United, is urging fashion brands to end their complicity in the forced labor of Uyghurs and other Turkic and Muslim people in northwest China.

The Coalition to End Forced Labour in the Uyghur Region, which is backed by over 70 Uyghur groups, today issued a call to action asking brands to commit to cutting all ties with the Uyghur Region within twelve months.

Over a million Uyghurs and other Turkic and Muslim people have been detained by the Chinese government since 2017, many of them forced to work in camps and factories in the Uyghur Region and across China.

With roughly one in five of the world’s cotton garments containing cotton or yarn from the Uyghur Region, the supply chains of countless global fashion brands are tainted.

“Many brands have known for years about the growing body of evidence around Uighur exploitation,” said Peter Irwin, a spokesman for the Uyghur Human Rights Project, an advocacy group based in Washington, D.C. “They won’t stop unethical sourcing practices unless they are faced with real reputational risk and the possibility that consumers will stop shopping from their stores.”

“Until now, there simply has not been enough pressure on big fashion industry names to completely cease ties with factories and suppliers in the Uighur region, an area on which many remain hugely dependent and where there is a huge amount of money on the line, ” Mr. Irwin said.

Many have described the Chinese government’s actions, estimated to represent the largest detention of an ethnic minority since the Second World War, as genocide and crimes against humanity.

The story of Dilara, shared this week in The Guardian, demonstrates that even Uyghurs that are model citizens by the government’s standards—fluent Chinese speakers, non-headscarf wearing, educated on China’s east coast—are targeted because of their ethnicity.

Dilara grew up in the Uyghur Region but moved to Turkey with her husband in 2015, triggering the detention of her mother when she returned to China from visiting her daughter.

When her mother returned to China in early 2018, she was told she needed “education”. Her passport was confiscated and she was imprisoned in an internment camp for nearly a year.

“All of my Uighur friends in Turkey have family members in the camps,” Dilara said.

Many have been interned for reasons as trivial as wearing headscarves or long beards, declining to eat pork, or in the case of Dilara’s mother, having travelled abroad. Many of them, according to Dilara, have also had their assets seized.

Since April, Freedom United has gathered over 25,000 signatures calling on the Chinese government to end this system. As part of the Coalition, we bring a crucial element of public engagement to the international effort to end forced labor in China.