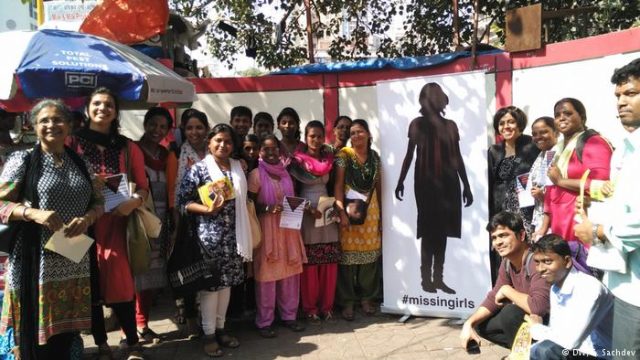 Artist Leena Kejriwal is using her work to inspire change in India.

The silhouettes point to a severe problem in India: according to national crime statistics every eight minutes a girl in India goes missing into the sex trade, domestic slavery, or organ trafficking.

Kejriwal says she came up with the idea during her public art residency at the School of Visual Arts in New York.

“Someone mentioned that ‘the eye is the biggest black hole. Everything sinks into it.’ And I knew my silhouette was black — a black hole into which the millions disappear when they go missing.” She’s even made the silhouette stencils free to download to get more people involved.

Building upon this, Kejriwal also crowdfunded a new mobile app called “Missing”, a role-playing game that allows users to “step into the shoes of Champa, a girl who has been abducted and trafficked, and they have to escape.”

The game can be played for free on a mobile phone anywhere in the world, making the story of trafficking something that could happen to anyone, rather than to some nameless, faceless child in a remote Indian village. “It was very important that we didn’t thump people with the message, but that it was playable.”

The game draws attention to the fact that 80 percent of India’s trafficked women are forced into the sex trade. Kejriwal designed it as an educational tool for NGOs and schools, but it appears to have reached a larger audience as it has been downloaded more than 500,000 times in 70 countries. The unexpected interest inspired her to create a longer, more in-depth game, which she crowdfunded last year.

It starts with Champa’s backstory as a young village girl and differs from the previous one in that it is a choose-your-own-adventure game with many possible futures.

The scenarios are based on interviews with hundreds of “missing” girls, as well as rescuers and social workers, says Kejriwal.

As the gaming community is 80% male, Kejriwal added that she hopes the game will sensitize men to the problem of human trafficking.

Robin Chaurasia of NGO Kranti agrees that “Missing” has tremendous potential. “Art is an amazing way to bring a topic to a wider, mainstream audience who wouldn’t otherwise feel a connection,” she said.

Kejriwal plans to release the game next year.