Independent legal review finds China in full breach of Genocide Convention - FreedomUnited.org
This website uses cookies to improve your experience. We'll assume you're ok with this, but you can opt-out if you wish.Accept Read More
Skip to content
Back to Global News 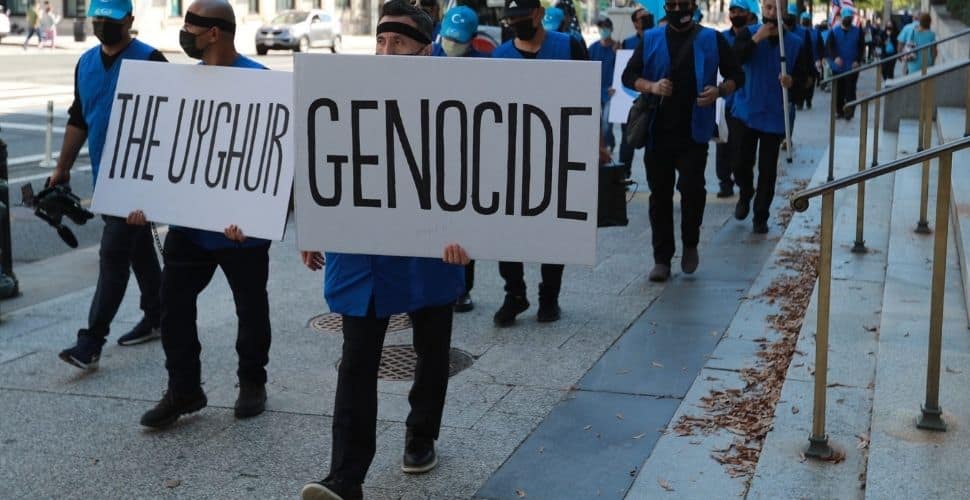 Washington, D.C. non-partisan think tank, Newlines Institute for Strategy and Policy, this week published an in-depth report investigating whether the treatment of the Uyghur people by the Chinese government breached the articles of the United Nations Convention on the Prevention and Punishment of the Crime of Genocide.

According to Article II of the Convention, a state may be guilty of genocide having committed any one of five defining acts. The 25,000-word report, produced by dozens of global experts in human rights, war crimes and international law, finds that the Chinese government is guilty of committing all five.

The think tank is clear that forced labor is a tool of genocide according to act c,

“(c) Deliberately inflicting on the group conditions of life calculated to bring about its physical destruction in whole or in part.” The authorities systematically target Uyghurs of childbearing years, household heads, and community leaders for detention in unliveable conditions, impose birth-prevention measures on Uyghur women, separate Uyghur children from their parents, and transfer Uyghurs on a mass scale into forced hard labor schemes in a manner that parallels the mass internment. In sum, China is deliberately inflicting collective conditions calculated to terminate the survival of the Uyghurs as a group.

It also states that the forced labor schemes are designed ‘to indoctrinate and “wash clean” brains, driving Uyghurs to commit or attempt suicide.

The Guardian reports that Chinese foreign minister, Wang Yi, just the day before the report was published, publicly stated once again that any reports of genocide are a “rumour fabricated with ulterior motives…”

However, this detailed, independent report of abuse and destruction levelled against the Uyghur people by the Chinese state aligns with countless reports by survivors and their relatives living abroad, journalists, agencies and human rights groups. Just last week, the UN High Commissioner for Human Rights, Michelle Bachelet, told the UN Human Rights Council that “information that is in the public domain indicates the need for an independent and comprehensive assessment of the human rights situation.”

The Freedom United community has been campaigning against the modern slavery situation in the Uyghur Region, urging the Chinese government to end the detention and forced labor of the Uyghur people, as well as contacting fashion brands that are potentially implicated in Uyghur forced labor to demand that they leave the Uyghur region.

We are part of a coalition of over 180 organizations, including 70 Uyghur groups, calling on apparel companies to help end the forced labor in the Uyghur region by signing our Call to Action.

At this point, there is too much evidence that crimes against humanity are occurring in the Uyghur Region for anyone to ignore. Since China is a signatory to the Genocide Convention, the Chinese government must take the findings of this report seriously. Until that happens, however, the rest of the world must continue to put pressure on them.

Join the campaign today and call on the Chinese government to end the forced labor and detention of Uyghur people.