I’m a survivor of sex trafficking and invisible no more - FreedomUnited.org
Skip to content
Back to Global News 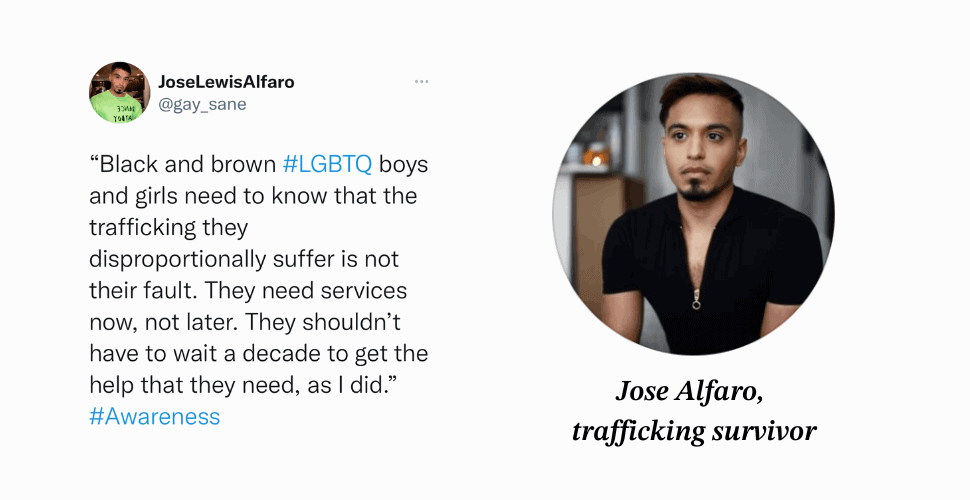 I’m a survivor of sex trafficking and invisible no more

“In the State Department Trafficking in Persons Report this year, I finally saw stories of LGBTQ survivors, and even a profile of a male survivor. This is a start, but it’s not enough.”

In a piece for the Boston Globe, Jose Alfaro, a gay, male Latino survivor of sex trafficking writes that — for the first time ever — the U.S. government has acknowledged that systemic racism makes people more vulnerable to human trafficking. It was the first time he saw his story, that of a gay child trafficked into the sex industry, represented.

I grew up in a religious household in a conservative Texas town. At 16, my parents, horrified that I was gay, gave me an ultimatum: “Either you are going to conversion therapy, or you need to get out of my house!” Kicked out of the house, I found myself homeless and alone.

Soon, a trafficker masquerading as a Good Samaritan took me into his home — and his massage business. I was trafficked into forced prostitution. Although I was still a child, my gender, sexual orientation, and race (Latino) rendered me invisible. I did not fit the Hollywood profile of a sex trafficking victim: I was not white, I was not blonde, and I was not female.

At the time, I didn’t know I was a victim of sex trafficking. I didn’t know boys could be trafficked. The movie “Taken” was the only mass media on human trafficking I could find. But I was nothing like the young white girl who grew up rich, only to be kidnapped while on vacation in Paris. I searched but couldn’t find anyone who looked like me in the media’s portrayal of human trafficking.

After escaping, he battled with PTSD, anxiety, and depression. He turned to survival sex on the streets of Houston, joining a community of unseen Black and brown LGBTQ boys and girls. Jailed three times, kicked out of bars, and unable to hold a job, he needed help but had been groomed by his trafficker to keep silent or face repercussions.

Several years later, the authorities arrested Jason Gandy, Jose’s trafficker, in London as he attempted to traffic another child. Jose testified against him at his trial in Texas, and Gandy was sentenced to 30 years in prison.

Now an adult, Jose writes that as a survivor he’s still fighting to be seen and heard, including by many anti-trafficking organizations that continue to amplify the voices of victims who fit the mold of “Taken.”

Many organizations and people who claim to be allies advocate for us only when they need to use us for clout for Juneteenth or Pride month. Each day, I experience first-hand the racism and homophobia that Americans continue to harbor. There is progress, but it is halting and too slow.

The U.S. Trafficking in Persons report is a start for the country to finally recognize the stories of LGBTQ survivors. Still, as Alfaro writes, much more must be done.

“We need investment, not just words: investment in homeless services for youth; investment in foster care programs for LGBTQ children whose parents have rejected them; investment in survivors. We need outreach and services to underserved communities. Black and brown LGBTQ boys and girls need to know that the trafficking they disproportionally suffer is not their fault. They need services now, not later. They shouldn’t have to wait a decade to get the help that they need, as I did.”

Sign the My Story, My Dignity pledge and call on the anti-trafficking sector to create more space for survivor leaders like Alfaro.

Thank you, Jose, for being so very Courageous and Brave by telling your story!!!

Unfortunately This petition is confusing. It is written as if each signer is a campaign writer/ designer which I expect most of us are not. We should be asking campaigners to take the pledge. I will sign anyway because it’s an important direction to go in.