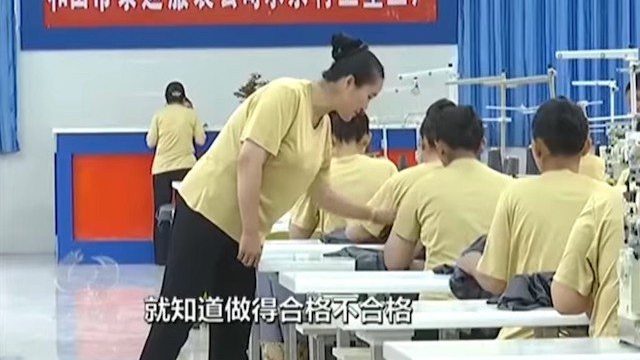 China is coming under increased scrutiny for its internment camps for Uyghurs in the northwestern province of Xinjiang.

The Uyghurs are a Muslim ethnic minority in far western China, but Beijing has detained hundreds of thousands of innocent Uyghurs and subjected them to a program that the Communist Party says offers them an escape from poverty and prevents the spread of radical Islam.

Satellite imagery and and accounts from the region now show that detained Uyghurs are being put on production lines of factories built within internment camps. They essentially have no choice but to take the jobs and accept orders.

“These people who are detained provide free or low-cost forced labor for these factories,” said Mehmet Volkan Kasikci, a researcher in Turkey who has collected accounts of inmates in the factories by interviewing relatives who have left China.

China has defied an international outcry against the vast internment program in Xinjiang, which holds Muslims and forces them to renounce religious piety and pledge loyalty to the party. The emerging labor program underlines the government’s determination to continue operating the camps despite calls from United Nations human rights officials, the United States and other governments to close them.

The program aims to transform scattered Uighurs, Kazakhs and other ethnic minorities — many of them farmers, shopkeepers and tradespeople — into a disciplined, Chinese-speaking industrial work force, loyal to the Communist Party and factory bosses, according to official plans published online.

Serikzhan Bilash, a founder of Atajurt Kazakh Human Rights, an organization in Kazakhstan that helps ethnic Kazakhs who have left neighboring Xinjiang, said he had interviewed relatives of 10 inmates who had told their families that they were made to work in factories after undergoing indoctrination in the camps.

They mostly made clothes, and they called their employers “black factories,” because of the low wages and tough conditions, he said.

Hetian Taida, a company in Xinjiang that was shown on a prime-time state television broadcast promoting the camps, recently sent a container of T-shirts to Badger Sportswear, a company based in North Carolina. Still, it was unclear if the Hetian Taida factory shown on TV was within a detention camp or if the specific T-shirts sent to Badger Sportswear were produced by Uyghur inmates.

Ginny Gasswint, an executive at Badger Sportswear, said the company ordered a small amount of products from Xinjiang, and used Worldwide Responsible Accredited Production, a nonprofit certification organization, to ensure that its suppliers meet standards.

Seth Lennon, a spokesman for Worldwide, said that Hetian Taida had only recently enrolled in its program, but stressed that “We will certainly look into this.”

Sounds like US and Canadian practice of child removal for adoption out of Native peoples’ children doesn’t it?

The program aims to transform scattered Uighurs, Kazakhs and other ethnic minorities — many of them farmers, shopkeepers and tradespeople — into a disciplined, Chinese-speaking industrial work force, loyal to the Communist Party and factory bosses, according to official plans published online.

And the these adopted chidlred are not enslaved and forced to work for free. DId you give one moment of thought to your comment?

No, while I don’t know about the Canadian practice, my understanding was that in the US native children could opt into attending boarding school. Aspects of this are similar to what happened to Indigenous Australians and Welsh, so far as banning them from speaking their own languages, and a disproportionate imprisonment rate in regards to the former (and banning their religious practices).

This is misinformation: “children could opt into attending boarding school. ” For much of the 20th century children were literally kidnapped and taken to distant schools where the regimen was often brutal. Many did not survive and very large numbers were never reunited with their parents again.

Stop referring in the news to ‘the Party’ as the ‘party’ are actual people guilty of the atrocities.

A case of the pot calling the kettle black.

What do you expect it’s China after all.. They treat humans as poorly as they treat their animals.
Coreen Kerr

They might even treat animals better…at least, they’re not subjected to slow torture…

Just for a bit of balance, let’s compare this with what transpires in the good ole USA, leader of the free world, where convicted prisoners (0.6% of population there) are usually forced to work for various well known corporations for almost nothing, or cop solitary confinement (ie torture) in mostly privately run prisons, after mostly being convicted via a plea bargaining process without any proper trial or discussion of evidence, but for a lucky 2 or 3% who are not poor, black or hispanic.

What are the location and names of these prisons ?

“convicted prisoners”. Big difference. Being free, and imprisoned by religion, or RACE, is another discussion all together. Imagine if “the good ole USA” simply imprisoned all of the keyboard jockeys…….. Whoa. My eyes may not hurt so much on the daily. But, Please do not compare your disgruntled, entitled thoughts, with the horrific injustices, death, torture, and daily pain that these people suffer thru. That, in itself, is a miscarriage of Justice for these people.

Don’t make light of this. It’s real and people are dying in the camps.