California's Incarcerated Firefighters Earn Only $2 a Day - FreedomUnited.org
This website uses cookies to improve your experience. We'll assume you're ok with this, but you can opt-out if you wish.Accept Read More
Skip to content
Back to Global News 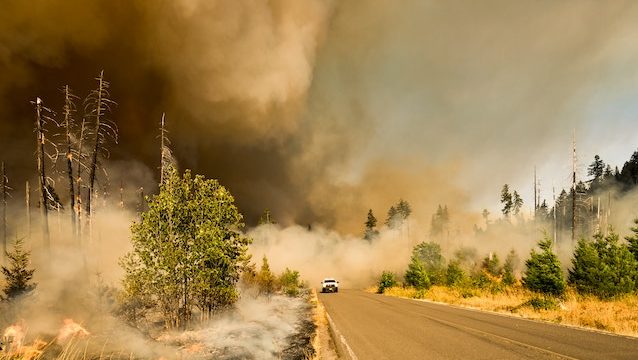 As wildfires spread across California, some 9,400 firefighters are working around the clock to control the blaze. Yet one segment of these firefighters are only getting paid $2 a day for their work.

Around 1,500 incarcerated firefighters are fighting the wildfires as part of California Department of Corrections and Rehabilitation’s (CDCR) ‘volunteer’ firefighting program, called the Conservation Camp Program.

As inmates, they earn a meager $2 a day — $3 if they fight active fires that put them on 24-hour shifts. For comparison, California’s civilian firefighters make an average of $73,860 per year plus benefits while working the exact same shifts, fighting the exact same fires.

As TIME reports, incarcerated firefighters are also at an increased risk of injury:

More than 1,000 inmate firefighters required hospital care between June 2013 and August 2018, according to data obtained by TIME through FOIA requests. They are more than four times as likely, per capita, to incur object-induced injuries, such as cuts, bruises, dislocations and fractures, compared with professional firefighters working on the same fires. Inmates were also more than eight times as likely to be injured after inhaling smoke and particulates compared with other firefighters.

Three inmate firefighters have died as a result of injuries sustained in the Conservation Camp Program in the last two years. Between February 2016 and July 2017, a boulder crushed one inmate, a 120-foot tall tree crushed another and a third sustained a severe cut to his femoral artery.

That leaves inmates deciding whether to participate in the volunteer program with a tough calculation: will they benefit from doing something good that could help them get a job when they’ve paid their debt to society? Or will they end up with injuries that make it even harder to get back on their feet upon completing their sentence?

California’s conservation fire camp program for inmates was founded initially as a way to provide support for firefighters during World War II. The idea is that it would teach inmates skills they can use post-incarceration.

“Our young men tend to have limited real-world job experience, so a benefit that they get here is learning the job skills that are necessary to work for an employer in the real world when they are released,” explained Jim Liptrap, the acting superintendent of CDCR’s Pine Grove conservation fire camp.

However, former inmates say getting hired as a firefighter isn’t always a reality. Much of this has to do with a rule that individuals convicted of felonies cannot obtain EMT licenses until they have been out of prison for 10 years. EMT licenses are required by most of California’s 900 fire departments.

“It’s interesting that I’m able to do everything alongside the paid firefighters right now, from treating patients on the scene and also putting out fires and extricating patients from vehicles,” said former inmate Ramon Leija.

“But when it comes to applying, I’m not offered the positions.”

SLAVERY IS ALIVE AND WELL IN OUR REPUBICoN DOMINATED GOVERNMENT…ANY FORM OF INHUMANITY FOR A BUCK (OR TWO). SHAMEFUL.

Guess “Orange is the New Black” isn’t exaggerating how exploited convicts are in America.

A high proportion of those incarcerated will have been wrongly convicted. You should check the statistics.

And most felons in jail have done crimes they got away with it before they are incarcerated as for every one case solved 100s never are.
Of course that gone way down was the unsolved rate use to be much higher but now we got a lot of electronic eyes out there and there are a lot less innocent convicted with that and DNA now then it was in the past

They should change the law so that these inmates can get EMT license. Most of these people or trustees who have proven that to trying to do something better for them selves. I don’t think the risk of them abusing their license is really great. And they can do checks to make sure the people they’re giving the license to aren’t high risk types would break into a home and rob or rape somebody. This was the biggest concern I’ve heard. And give them decent pay while incarcerated too.

unfortunately most in felons are high risk for EMT work as thief’s could steel jewelry and drug addict could sell the meds off the truck but there should be exceptions. but as far as paying them more they costing the tax payer up to 40k a piece and sadly never even made that much even in the air force and of course in the air force you do not get free cloths and when was no toilet paper or cleaning supply’s. if you want a cause support disabled people which the government keeps in poverty

I think it’s a good idea for prisoners to work in the community. They should do it in England. I also think it should be the prisoner’s decision, if there is a reward for doing the work…. or not.