Abused Ethiopian Domestic Worker is “Poster Girl for Kafala” in Lebanon - FreedomUnited.org
This website uses cookies to improve your experience. We'll assume you're ok with this, but you can opt-out if you wish.Accept Read More
Skip to content
Back to Global News 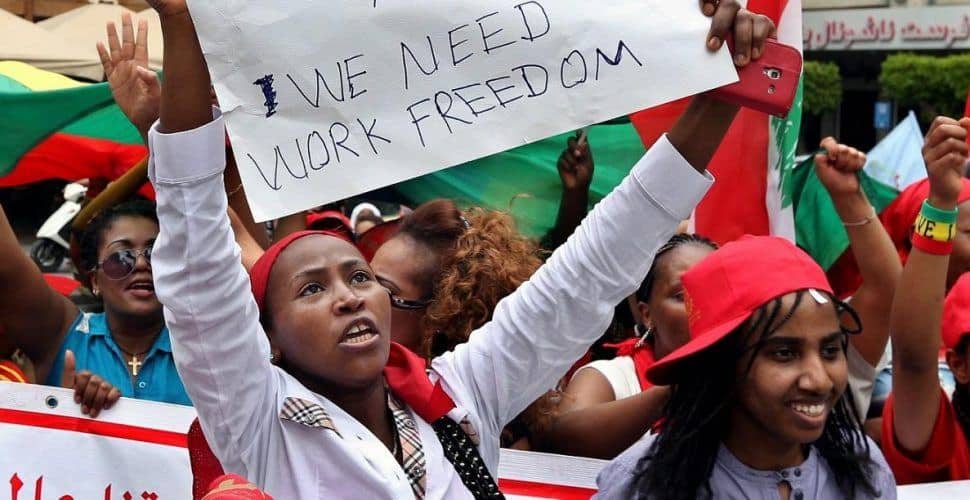 Lensa Lelisa made headlines earlier this year in Lebanon when she tried to escape her abusive employer. The 21-year-old Ethiopian domestic worker jumped from the balcony of her employer’s home, breaking both of her legs and injuring her face.

Take action to protect domestic workers from abuse and exploitation.

It was her last resort to escape from the home of her employer, Lebanese fashion designer Eleanore Ajami, and her three children. From her hospital bed, she says on a video recorded by This is Lebanon — a group that shares stories of domestic worker abuse in the country — “They tortured me and I couldn’t do anything to save myself. They beat me every day with an electric cable and wrapped my hair around their hands and dragged me around the room. They smashed my head into the walls.”

Despite her claims, a police investigation cleared her employer of any abuses. She soon thereafter appeared on national television with her employer’s daughter, recanting her original story by explaining that she had simply slipped from the balcony while hanging laundry.

Unbelievably, Lensa was discharged from the hospital and returned to her employer. There has been no news from her since then.

“Lensa is the poster girl for the kafala system [the sponsorship system that legally binds foreign workers to their local employers]”, says Dipendra Uprety, the founder of This is Lebanon.

“She was paraded on her hospital bed on live TV. How is that ethical? Why wasn’t she moved to a safe house where she felt free from retaliation? Why was she only interviewed under the watchful eye of her abuser?” he says.

Bassam Khawaja, Lebanon researcher for Human Rights Watch (HRW), concurs. “Security agencies need to take into account the vulnerability of migrant domestic workers in these situations and ensure that workers alleging abuse can speak freely without fear of retaliation,” he tells Equal Times. “That did not happen in this case.”

Lebanon has approximately 250,000 migrant domestic workers, all of whom are excluded from labor law protections. The country has yet to ratify ILO Convention 189 on Domestic Work as well, meaning it is common for workers to be paid below minimum wage, confined to their employer’s home, and intimidated.

“Lebanon excludes domestic workers from the labour law, and alongside Oman, it is one of just two major countries of destination in the Middle East that have not put in place legal protections for domestic workers,” said Khawaja.

In 2015 there appeared to be sign of progress as the Domestic Workers’ Union of Lebanon was founded, the first union for migrant workers in the country. Yet the Ministry of Labor declared it illegal. While the union still campaigns for domestic workers’ rights, it has had limited success with just 700 members.

Speak up for domestic workers rights.

Someone needs to do a “follow-up story” on Lensa!

Yes! How is she doing? Is she still alive?