Global supporter survey findings: how did you rate your government? - FreedomUnited.org
Skip to content
Back to Global News

Global supporter survey findings: how did you rate your government?

The results of the Freedom United Global Supporter Survey are here! We asked you to rate your government’s response to modern slavery and speak out on what you believe needs to change.

We were thrilled by the thousands of supporters who took the time to complete the survey — thank you!

So which country was rated the highest? The lowest? Take a look below at the global summary of responses.

We’ve highlighted countries where we had the highest number of responses, as well as some of the most thoughtful comments from around the world.

How long have you been part of the Freedom United community?

Most of you have been with us for over a year, though a sizeable portion are new to the community (welcome to our newcomers!)

How would you rate your knowledge about modern slavery?

The top response: a “moderate amount of knowledge,” followed by “a little knowledge” about modern slavery. We hope that the longer you’re part of the movement, the stronger your knowledge will become!

How much of a problem do you think modern slavery is in your country?

It’s notable that the majority reported modern slavery as a “significant” problem where you live, followed by “moderate” and “minimal.” Over 10% of you considered it a “severe” problem.

How would you rate your country’s government response to modern slavery on a scale from 0 to 100? (0 being extremely poor and 100 being excellent.)

The message is clear: governments are failing in their response to modern slavery in our community’s opinion. The global average score was a exceptionally low 39 out of 100.

When broken down further by the countries where we received the highest number of responses, it’s remarkable how low all countries were rated.

While New Zealand technically came out on top with an average rating of 59 and Turkey at the lower end with an average score of 26, all countries here have failing scores.

Average country scores from places where we received the highest number of responses:

Why did you give this score?
(Selected answers)

1)Successive governments don’t investigate instances of slave labor, children that work instead of going to school, sexual slavery etc. Boys, girls and young people that go missing. Awareness-raising campaigns to educate the public don’t exist. Instead they look the other way as if nothing’s happening.
–Alejandro, Argentina, score for country: 50

2)Canada has yet to ensure that corporations doing business here are not responsible for slavery, child labour and exploitation abroad. Too many Canadian companies take advantage of “economic free zones” where there are virtually no labour rights or standards.
–Virgil, Canada, score for country: 75

3)Although a lot of work is being done by non-governmental agencies to alleviate ignorance and educate the lower classes that are easy prey for modern slavery, our country is a racist one. We have a deep routed class system and until dignity of labour and a corruption free administration can be provided, not much can be done. I see efforts being made by the government but even they cannot do much until the people themselves rise up.
–Raphae, India, score for country: 25

4)There have been formal and legal steps taken towards criminalising modern slavery but in practice there are still many socially and legally accepted practices (especially the use of poorly-paid resident domestic [workers]) that border on it.
–Pradana, Indonesia, score for country: 32

5)There are certain vital sectors such as plantation workers, apparel sector workers, and low skilled migrant workers who make an enormous contribution to the national economy, whose fundamental rights and labour rights have not been fully supported.
–Andrew, Sri Lanka, score for country: 40

6)Little to nothing is being done to stop child [sex trafficking] or to control what happens to Kenyans who go to work in the Middle East. Even the court system in our county proceeds at slower than a crawl.
-Dawn, Kenya, score for country: 7

What do you think is the greatest issue related to modern slavery that your country is failing to address?

1)Agriculture-related activities are the main area where slavery is adopted as a means to [undercut] competition. Everybody knows where it is concentrated, who is involved, [and] with connections with local criminals, but not enough efforts are made.
-Giorgina, Italy

2)The kafala system. The Minister of Labor has talked about abolishing it [and] called it what it is — modern slavery — but so far has failed to make any changes.
-Steph, Lebanon

3)Good question. Probably not blocking products from brands that are known to use modern slavery (directly or indirectly).
-Jochem, Portugal

4)There’s a public conception that slavery means visible chains. The fact that it’s more subtle than that means it’s not seen as important when the chains are invisible.
-Margaret, UK

5)The huge numbers of (mostly brown) people jailed for minor offenses, who are “allowed” to work for $1 per day; the problem exists in public and in for-profit prisons and detention centers.
-Frances, USA

Agree or disagree: if you saw or knew of a potential case of modern slavery, you would know how to report it.

Most of you said you would know how to report a suspected case of modern slavery if you looked it up, but we’re encouraged by the fact that over 45% said they already knew how to report it.

What is the minimum amount of time you think your government should be responsible for providing victims of trafficking with support and rehabilitation services?

Most supporters chose “Other” and explained that there should not be a time limit for victim support from the government, noting that rehabilitation services should be available for “as long as it takes” for survivors get back on their feet.

A few specific clarifications for “Other” included:

1)As long as needed — on a case-by-case basis. The victim and the social worker can figure this out, with oversight to prevent negligence or abuse.
-Glen, USA

2)One year as a target, but not limited to that if further help is needed.
-John, UK

3)Ideally, for as long as it was deemed necessary by qualified experts. In practice, for at least a year or until they found work and a place to live in.
-Juan José, Spain

4)Until they have been successfully rehabilitated, either here or back in their home country, if that is their wish.
-Anthea, Australia

Agree or disagree: undocumented victims of human trafficking can come to the authorities in my country for help without fear of being deported or punished for immigration offenses.

Nearly 50% of supporters said that undocumented trafficking victims could not come forward without fear of being punished for immigration offenses — a clear indicator of why many are afraid to seek help.

With many governments tasking immigration departments with overseeing support for trafficking victims, this is another likely reason why people may be fearful.

Agree or disagree: foreign survivors of human trafficking should have the right to stay (i.e. a visa) in the country where they were trafficked in order to obtain rehabilitation support.

Around 75% of supporters believe that foreign survivors of trafficking deserve the right to stay so that they can access rehabilitation services, sending a strong signal that more governments should support, rather than deport, victims.

Agree or disagree: survivors of human trafficking who were charged with minor crimes (e.g. theft, selling drugs, prostitution) they were forced to commit during their exploitation should have their criminal records wiped clean

Over 77% of supporters agreed with this statement, the majority saying they “strongly agree.” Around 5% disagreed.

Agree or disagree: victims of trafficking should be given the right to work while their case is being investigated by the government.

The strongest response of all of the agree vs. disagree questions: 89% of you said that victims deserved the right to work.

Thanks again to the Freedom United community for sharing your opinions on what you believe is needed to fight modern slavery.

If you have any questions about our global survey, feel free to email us at info[at]freedomunited.org 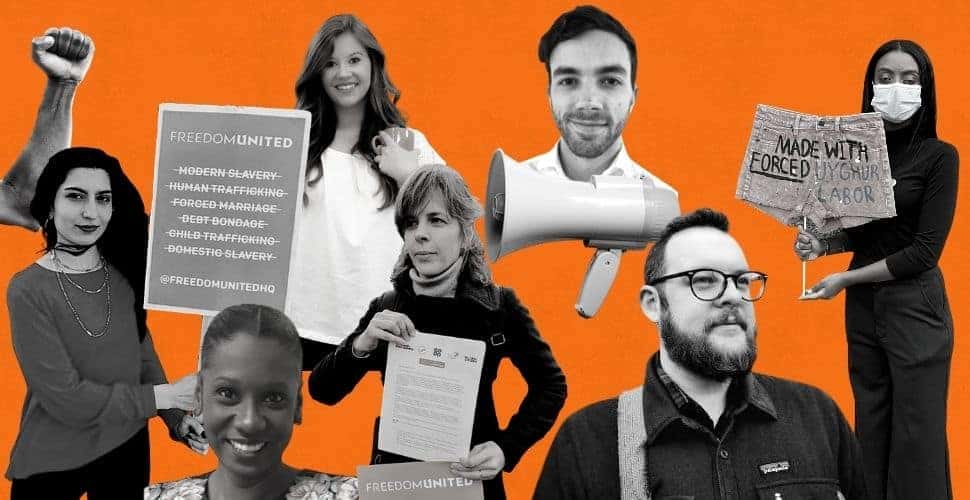