Yazidis Fleeing ISIS Start Over in Female-Only Commune - FreedomUnited.org
This website uses cookies to improve your experience. We'll assume you're ok with this, but you can opt-out if you wish.Accept Read More
Skip to content
Back to Global News 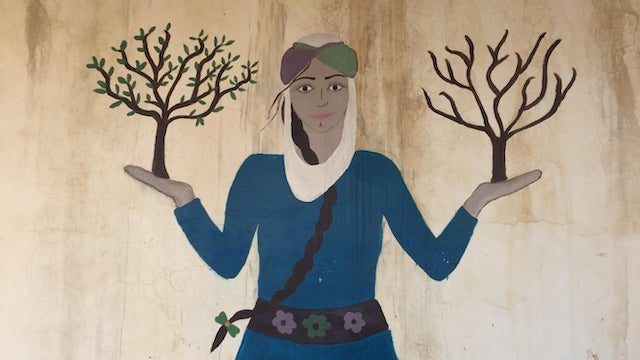 Berivan and her mother were kidnapped by ISIS in 2014 back in their homeland of Sinjar in Iraq. But today, they’re part of a group of Yazidi women in Jinwar in northeast Syria who are rebuilding their lives through a women-only commune.

They are among the lucky ones, as many Yazidi women were taken to ISIS slave markets, sold into sexual slavery and passed from fighter to fighter. Even as ISIS loses ground, some 3,000 Yazidi women and girls remain unaccounted for.

Berivan and her mother say they their relatives are among those missing, but they are hopeful about their future.

Jinwar is a female-only community, set up by the women of the local Kurdish-run administration to create a space where women can live “free of the constraints of the oppressive power structures of patriarchy and capitalism”. It opened in November and 12 of its 30 adobe brick houses are home to Kurdish, Yazidi and Arab families.

The women built their own houses, bake their own bread and tend to the livestock and farmland, cooking and eating together. On Saturday, people from the neighbouring villages have been invited to a graduation celebration for a group of local women who had attended a course on natural medicines at Jinwar’s education centre.

Over chicken and rice, and later music and dancing, residents discuss how the newly planted apricot, pomegranate and olive trees are doing.

“We built this place ourselves, brick by brick,” says 35-year-old Barwa Darwish, who came to Jinwar with her seven children after her village in Deir Ezzor province was freed from Isis and her husband, who joined the fight against the group, was killed in action.

Jinwar was born out of a democratic ideology behind the creation of Rojava, a Kurdish-run statelet in north-eastern Syria, since the civil war broke out in 2011. The women’s revolution is part of Rojava’s philosophy, and it is notable for bringing together Kurdish, Arab, and Yazidi women.

“When the families first arrived, the Arab children wouldn’t play with the Kurdish children,” says Nujin, one of the international volunteers working at the village.

“But even in just two months you can see the change. The children are already so much happier.”

Why? Yazidis and Kurdish Muslims are quite gender-egalitarian, far from ISIS and Wahabi attitudes. Beware trading one oppressive ideology for another–such as male-hating feminism.

I suppose after their experience they feel safe here. How is that man-hating?

You suppose a great deal. I would not presume to attribute motives to each of them (such as having lost their extended families, including fathers and brothers and sons who died protecting them), but was referring to the simpleminded motive attributed by the original article’s Western author: “In Jinwar, north-eastern Syria, a pioneering group of women are rebuilding their lives away from the constraints of patriarchy”. Videos of Kurdish women fighting ISIS beside their men belie [no space left]