Adjourned: Vietnamese Child Trafficking Survivor’s Asylum Appeal Delayed - FreedomUnited.org
This website uses cookies to improve your experience. We'll assume you're ok with this, but you can opt-out if you wish.Accept Read More
Skip to content
Back to Global News 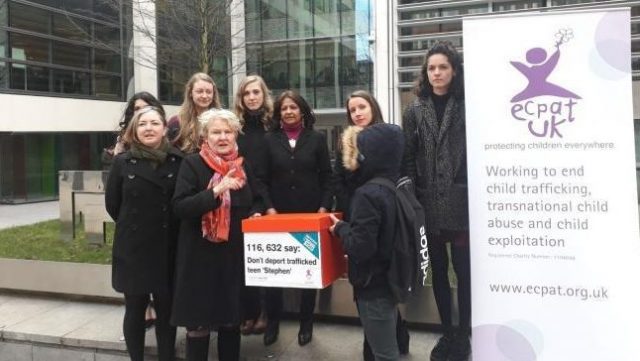 The wait for Steven continues. The Vietnamese orphan who was trafficked to the UK when he was only 10 and forced to grow cannabis had his asylum appeal case postponed this week. Ahead of the appeal hearing, Freedom United handed in our petition in support of Steven to the UK Home Office.

Steven is facing deportation to Vietnam if the Home Office does not reverse its earlier rejection of his asylum claim.

An adjournment was granted at North Shields County Court in the case of ‘Stephen’, who at the age of ten was trafficked from Vietnam to the UK and forced to work on a cannabis farm before being rescued by police.

The hearing came as an open letter, hosted by 38 Degrees and signed by MPs, religious leaders and 80,000 members of public, was handed to the Home Office calling on Home Secretary Amber Rudd to intervene.

His application for asylum, on the grounds he no longer has any ties to Vietnam and would face religious persecution, was refused last year.

Judge Holmes says the Home Office served the court with new material last Thursday and Stephen’s solicitors had not had enough time to respond. According to Steven’s foster father, the Home Office sent the court a letter that rejected Steven’s Christian faith as a grounds to claim asylum.

However, because this letter was sent less than 48 hours before the appeal, Steven’s barrister did not have enough time to study the letter’s implication and thus requested that the case be adjourned. The judge agreed and adjourned the case.

No date was set for the final hearing, but it will likely occur in July of August.

Steven, who is now in college and living with a foster family, will be able to take his college exams in June as the wait continues.

His foster dad added, “Stephen doesn’t really understand and is disappointed that three years down the line we’re still in a situation where we don’t have an answer. The adjournment is for his benefit and is about strengthening his case and responding to the documents filed late.”

This is the second crazy decision i have looked at in the last five minutes what is the home office doing, do those who make such life altering decisions even read the applications in front of them. Because if they do then it is clear they have little or no understanding of what is being said. Come on Ms Rudd get better staff in post so we can see some sensible decisions being made.

This child should now be protected and be able to remain in the UK. With support from social workers he can be educated and trained to make a good life for himself here, free from fear.

This young man has made the best of every opportunity he has been offered.
He has nothing and no one Vietnam, and if he is returned he is going to be at risk. If he was put in that situation in this country it would be regarded as nothing short of abuse.
All he wants is to stay here and become a productive member of society with a reasonable standard of living.

What is the MATTER with Amber Rudd? Can she not see where justice lies?