Trafficking Survivors: Don't Treat Us Like Zoo Animals - FreedomUnited.org
This website uses cookies to improve your experience. We'll assume you're ok with this, but you can opt-out if you wish.Accept Read More
Skip to content
Back to Global News 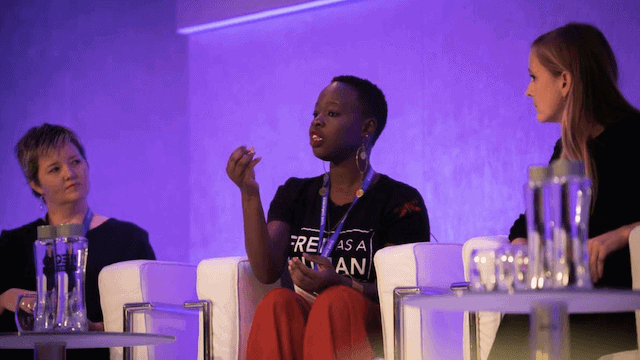 “We’ve lost funding because I refused to parade victims in a zoo.”

Sophie Otiende, a program consultant at HAART Kenya and Freedom United Board of Advisors member, stated this stark truth last week to audiences at the Thomson Reuters Foundation’s annual Trust Conference in London.

“There’s a lot of education that needs to happen, because people see survivors as others,” she added.

While there is a growing awareness of human trafficking around the world, Otiende explained that survivors do not want people’s sympathy. They want to be called upon, but not objectified in the process.

“People will only listen when I say I’m a survivor… as if somehow that qualifies me rather than all the work I’ve done,” said Otiende.

“Something really horrible happened to me, and basically you’re judging me for it for the rest of my life.”

Young survivors do not need sympathy but support including housing, healthcare and education in order to stop them falling back into slavery, activists say.

“I do not want sympathy. It’s in the past now. But there are still people in the situation I was in,” said Joseph Mwuara, a survivor of orphanage trafficking in Kenya.

According to Lumos, a charity founded by “Harry Potter” author J.K. Rowling, about 80% of the 80 million children in orphanages and other institutions are not actually orphans.

Rather, many children are victims of orphanage trafficking, where they are taken from their families under the promise of an education and placed in orphanages to attract donations from wealthy visitors.

Human rights advocate Snezana Vuckovic says it took her years to speak about the abuses she suffered at an orphanage in Serbia for for that she would be defined by it.