Tower Hamlets Council Takes Up Charter Against Modern Slavery - FreedomUnited.org
This website uses cookies to improve your experience. We'll assume you're ok with this, but you can opt-out if you wish.Accept Read More
Skip to content
Back to Global News 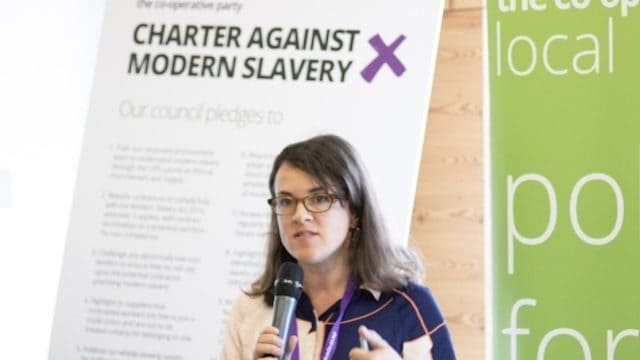 Deputy mayor for regeneration Rachel Blake is just one of 12 local authorities to sign the charter.

“This is such an important issue,” she said. “The charter is a strong step forward in tackling modern slavery and I’m pleased to sign it for Tower Hamlets.”

Mayor John Biggs issued a strong warning for unscrupulous suppliers, vowing to cancel any contract where “21st-century slavery” was found.

The Docklands & East London Advertiser reports that the charter goes beyond standards set by the UK Modern Slavery Act:

Local authorities have statutory duties under the 2015 Modern Slavery Act.

But the Co-Operative party’s charter goes further with commitments to stop their suppliers exploiting their workers, which it says can occur “under our noses” in places like nail bars, car washes, farms, factories and restaurants. An estimated 13,000 victims are caught up in ‘modern slavery’ in Britain every year.

The charter requires supply and services contracts to be terminated as a sanction for non-compliance.

It challenges any abnormally low-cost tenders to ensure they don’t rely on modern slavery, insists that all workers are free to join a trade union and are not unfairly treated for belonging to one and also requires a whistle-blowing policy.

Mayor Biggs added, “We are determined to tackle modern slavery head on to root it out by signing the charter to send a strong message that we won’t tolerate any form of exploitation.”