The Root of Iran's Child Labor - FreedomUnited.org
This website uses cookies to improve your experience. We'll assume you're ok with this, but you can opt-out if you wish.Accept Read More
Skip to content
Back to Global News 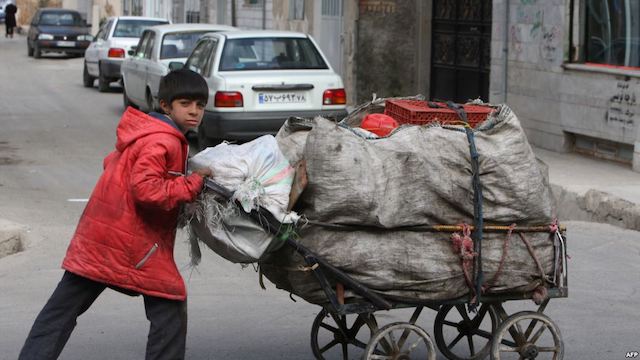 The Root of Iran's Child Labor

“Child workers are so numerous that no organization can single-handedly cope with the problem.”

It’s a stark admission from Reza Jafari, the director of the Iran Welfare Organization’s office. And he’s not the only Iranian official to note the scale of the problem.

UNICEF statistics from 2012 estimate that around 11.4% of Iranian children are doing some kind of illegal work. This is in spite of Iranian law, which prohibits anyone under the age of 15 from working.

Yet as Radio Farda reports, organized crime and the realities of poverty mean child labor persists:

Human trafficking makes tracking child labor immensely difficult. As well as adults, gangs target homeless children, often from the families of undocumented refugees from Afghanistan. A number of these children are forced to work in agriculture and construction along with adult debt slaves.

Organized crime groups force children to work on the street begging or selling goods. Some reports have identified children as young as three who were coerced into this work. Many of the children also undergo physical and sexual abuse from the traffickers, as well as sometimes being forced into drug addiction.

Homelessness makes children especially vulnerable to trafficking and forced labor. According to the government’s official statistics, over 60 thousand children live on the streets in Iran. Non-governmental organizations and charities put this figure much higher at 200 thousand. Child homelessness is particularly concentrated in large urban areas, namely Tehran.

However, there are signs of progress. Tehran is currently seeing a growth in the number of charities and outreach centers to help poor families and children who are vulnerable to child labor.

Still, according to economist Hossein Raghfar, 12 million Iranians live in absolute poverty out of the country’s population of 80 million. This, in combination with Iran’s unstable economy and cutbacks on welfare, may mean that Iran will continue to struggle to end child labor for some time.