Thai Chicken Farm Thammakaset Goes After Abused Migrant Workers Yet Again - FreedomUnited.org
This website uses cookies to improve your experience. We'll assume you're ok with this, but you can opt-out if you wish.Accept Read More
Skip to content
Back to Global News 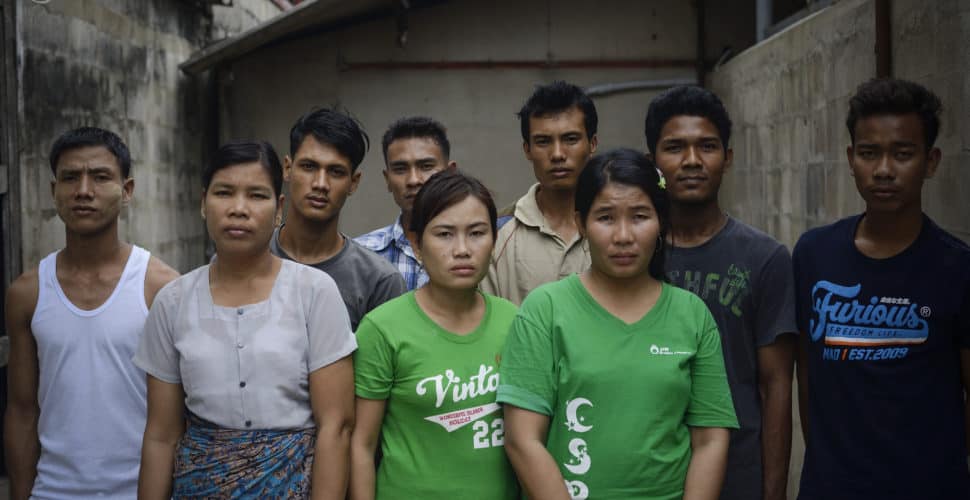 Two of the 14 migrant workers from Myanmar who spoke out about their exploitation while working for Thammakaset Farm Co. Ltd. poultry farm are facing a fresh set of criminal charges for the fifth time.

Thammakaset has filed criminal charges against the two workers for theft of their own timecards, which proved that they were logging up to 20 hours a day on the chicken farm. This latest retaliation by the company comes less than a month after the Don Muang Magistrates Court ruled that the 14 former employees were not guilty of criminal defamation and giving false information to public officials.

Freedom United’s partner, Migrant Workers Rights Network (MWRN), which is assisting the workers facing charges, points out that at the time of the abuses, Thammakaset was still a supplier for Thailand agro-giant Betagro’s European and Japanese poultry export supply chains.

If convicted of the latest criminal charges filed by Thammakaset on 1st August 2018 under section 335 (11) of Thailand’s Criminal Code, the two workers face up to five years in prison and/or a 100, 000 baht fine.

These latest charges concern alleged theft of the worker’s own timecards showing working hours of up to 20 hours per day. The timecards were broadcast on 27th July 2016 alongside worker interviews concerning this dispute on Thai PBS news channel.

Both cases, dismissed by a first instance Court and Lopburi Public Prosecutor respectively, are still however being pursued on appeal and through private prosecutions by Thammakaset within the Thai justice system.

In addition, Thammakaset has filed three additional criminal cases against the workers, NGO activists and has also threatened more prosecutions including against local Thai journalists.

The case began in June 2016 when the 14 Thammakaset workers filed a complaint with the Department of Labour Protection and Welfare (DLPW), alleging that the poultry company failed to pay workers minimum wage, adequately compensate for overtime, and provide adequate leave. The DLPW ruled in the workers’ favor, ordering Thammakaset to pay 1.7 million Thai Baht in damages.

However, Thammakaset appealed, asking for the ruling to be considered by the Supreme Court. Until now, none of the workers have received any of the 1.7 million Thai Baht.

Since this case was reported on internationally, major German retailers and companies have suspended sourcing poultry from Thailand. However, Nordic companies, in tandem with the UK’s Ethical Trading Initiative, the EU’s Amfori, and a Thai poultry exporter, continue to seek to promote reconciliation and have been supporting the legal defense funds of the migrant workers.

Troublingly, Thailand’s main poultry associations are currently lobbying the Ministry of Labor and the National Human Rights Commission of Thailand to amend Thai labor laws. In contrast to decent work standards of their international buyers, the associations are pushing for the ability to work employees more hours without pay during break times and to work them for up to 8 weeks without a weekly day off.

In a recent visit to Thailand, six UN human rights experts explicitly highlighted Thammakaset’s retaliation against workers, calling on the Thai government “to revise its civil and criminal laws as well as prosecution processes to prevent misuse of defamation legislation by companies.”

The way to deal with such culprits is to arrest them and keep them behind bars while the case is on going so they can not use their financial power to divert the justice process.