Fight exploitation in the Thai chicken industry - FreedomUnited.org
This website uses cookies to improve your experience. We'll assume you're ok with this, but you can opt-out if you wish.Accept Read More
Skip to content 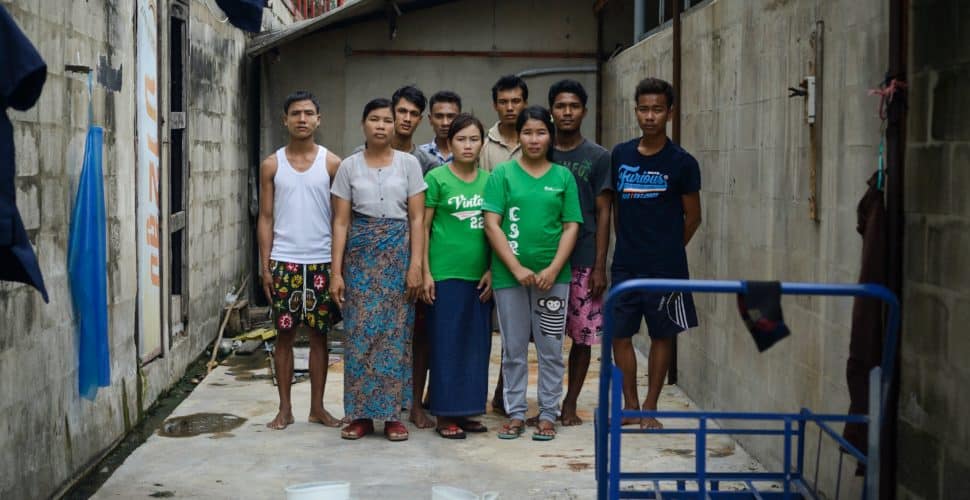 “All day and all night we had to work. I don’t want anyone else to have to face the same ordeal.” Nayto, migrant worker from Myanmar

In late June 2016, 14 migrant workers escaped a chicken farm in the Lopburi region of Thailand. Their reports of harsh treatment, exhaustive hours and despicable work conditions made instant headlines.1

The 14 workers told Migrant Workers Rights Network (MWRN) that they were subjected to abusive supervisors, working hours that stretched through the day and night. They said they had little to no time off and endured terrible living conditions – sometimes sleeping alongside the hatchlings. The workers said they could only leave for a single two-hour supervised trip per week and that their passports were confiscated.

“I worked for 4 and a half years, often cramming 2 days’ work into one. I’m tired now and want to go home.” Myint, migrant worker from Myanmar

Betagro is one of Thailand’s largest chicken exporters, supplying chicken for pet food and ready-made meals, used to buy from this farm but recently cut ties.2 Yet by cutting off this supplier, there is little leverage to rectify abuses and promote improved labor protections down their supply chain.

Since launching this campaign in 2016, Thai courts have ordered compensation for the workers, but they and other human rights defenders are not in the clear just yet.

The farm owner continues to press defamation charges against Nan Win — one of the 14 workers — and Thai human rights activist Sutharee Wannasiri for speaking out about the abuses.3

Stand with migrant workers in the Thai poultry industry who fight for justice and demand an end to their harassment.

I think we should eat less chicken for starters so these appalling chicken factories don’t even exist. We are all part of the problem.

I think you have to be more careful about where your chicken comes from.

I’m not part of the problem

It’s important to know that Betagro products are sold in Europe https://www.pressreader.com/thailand/the-nation/20160526/281535110232119
European consumers cannot support companies making business with Betagro unless they leverage their bargaining power to influence this company. European companies are not resposible for what happens in Asia but they have the legal obligation to manage a due diligence process.

Phillipe – I disagree that EU companies are not responsible. All companies are responsible for their supply chains, no matter where they are. If there are reports of wrong-doing, they should investigate and take corrective action, or if necesary as in this case, replace the supplier. Anything less is to profit from the expoitation and therefore be complicit in the perpetuation of modern slavery.

Hi Paul
I think we exactly say the same thing with different words ^^
When I write “they have the legal obligation to manage a due diligence process.” it means identify, mitigate, monitor.
Companies always have to be careful when making the decision to replace a supplier, it’s always better to try a collaboration in order to improve situation (possibly with the help of a local NGO).Brutal ending of business relationship can have impact on the life of employees “do no harm” principle.

Whilst I fully support these workers, I also cannot help but imagine the conditions the poor chickens must be kept in – these horrific places should be closed down completely if they cannot improve the environment for both the people and the livestock.

It is scandalous that such despicable working conditions can happen in the 21st century! It is high time to stop modern slavery, which is a severe violation of human dignity. However, I do not agree that European companies are not responsible for what happens in Asia. WE ALL are responsible – directly or indirectly! WE ALL, companies and consumers, have the obligation to scrutinize where the food we sell or buy comes from, and we should reject it if it comes from modern slavery sources.

Disgusting behaviour for these workers and one then thinks if this is how the Workers are treated what about the Chickens ?
Both the Workforce AND the Chickens need proper care !!

This Campaign made an impact with 88,847 supporters!