Survivors Write 110,000 Postcards to PM Modi - FreedomUnited.org
This website uses cookies to improve your experience. We'll assume you're ok with this, but you can opt-out if you wish.Accept Read More
Skip to content
Back to Global News 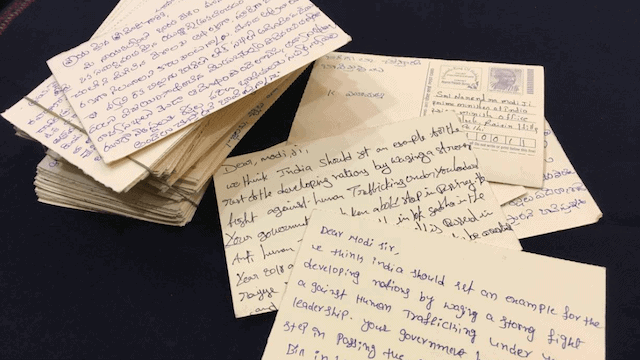 Survivors of human trafficking across eleven Indian states are making a final push to convince lawmakers to pass a long-awaited anti-trafficking bill.

The Trafficking of Persons Bill was passed by India’s lower house of parliament this July and is expected to be tabled in the upper house in the coming weeks.

However, if the bill is not passed by January 8 — the end of the upper house session — survivors fear the that legislation will stall indefinitely as the country turns its attention to general elections.

“It needs to pass this time so that victims finally get all the help and facilities to start a new life,” said a 29-year-old who was trafficked when she was a teenager.

Survivors from 11 states have turned campaigners in the last few months by roping in their communities to write more than 110,000 postcards to Prime Minister Narendra Modi, urging him to ensure the bill is passed by parliament in the coming months.

The proposed law prioritises survivors’ needs and prevents victims, such as those found in brothel raids, from being arrested and jailed like traffickers, who would face prison sentences ranging from 10 years to life under the legislation.

Activists and lawmakers say the bill unifies existing anti-trafficking laws and aims to make India a leader in the fight against such crimes in South Asia – one of the world’s fastest-growing regions for forced labour, begging and forced marriage.

“It is sad to see how for the lust of money, people have shamed humanity. This must stop,” said Akhilesh Prasad Singh, an upper house lawmaker from the main opposition Congress party.

“All parties … should discuss this bill in this winter session and pass it with necessary provisions.”

However, there is fear that the current bill does not distinguish between trafficking for sexual exploitation and adult, consenting sex work. Sex workers’ rights organizations fear that sex workers could be held in ‘rehabilitation’ centers against their will.

Tabling the bill in the current upper house session could help open a debate to iron out these sticking points.

Advocacy around this bill has been impressive as it has united survivors of trafficking, coming forward to share their stories despite societal stigma. To date, about 1,000 survivors have sent letters to state MPs, while another 12,000 have signed or put their thumbprints on a petition.

“The survivors have brought the issue out in the open,” said Uma Chatterjee, co-founder of non-profit Sanjog.

“Suddenly, common people are stopping, listening and pledging their support. That is huge.”