"Superstar" Comic Warns Teens on Snapchat, Instagram - FreedomUnited.org
This website uses cookies to improve your experience. We'll assume you're ok with this, but you can opt-out if you wish.Accept Read More
Skip to content
Back to Global News 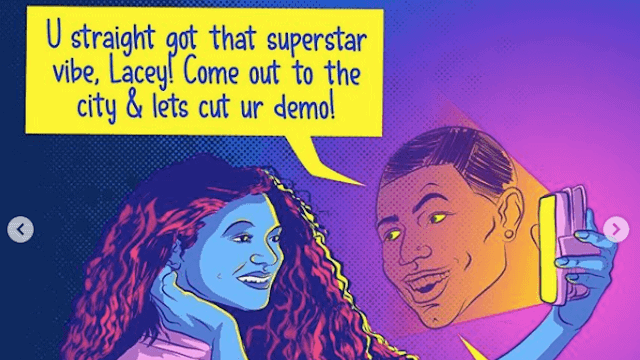 A new comic launched on Snapchat and Instagram is aiming to teach teens about human traffickers contacting them over social media.

The first two 10-panel stories, in a series called “Wolves in the Street,” tells the story of a teenage girl who dreams of becoming a singer when she is contacted by a man on social media who promises to make her a superstar.

Dan Goldman, the artist behind the comic strip, teamed up with with anti-trafficking NGO Unitas to create the story, ensuring that it is based on real-life experiences of trafficking victims.

“The idea behind doing the comics this way is that we were going to go where people were looking – jump in front of their eyes,” said Goldman

“I think that empathy is the key, and you can build empathy through storytelling.”

Instead of lurking in shopping malls and parks, predators who befriend and sell children for sex now hang out on social networks like Facebook and gaming sites, experts say.

In the first comic strip, the teenage girl heads straight to the big city on a bus, only to be forced into prostitution.

The alternate strip starts out the same way, but instead of going along with the lure of easy stardom, the girl reaches out to her aunt for advice.

From there, everything changes. Her aunt helps her choose a path of hard, but emotionally rewarding, work.

Goldman said he hopes that the strips will be enough to cause “a moment’s hesitation” in young readers, and that they will use that moment to seek advice or help.

Andrea Powell, a UNITAS board member, added that the “Wolves on the Street”comic is just one part of their efforts to raise awareness of human trafficking among teens.

“The closer we bring this story to reality, the more likely we are to get youth to listen,” Powell said.