South Korea Apologizes for Brothers Home Atrocities - FreedomUnited.org
This website uses cookies to improve your experience. We'll assume you're ok with this, but you can opt-out if you wish.Accept Read More
Skip to content
Back to Global News 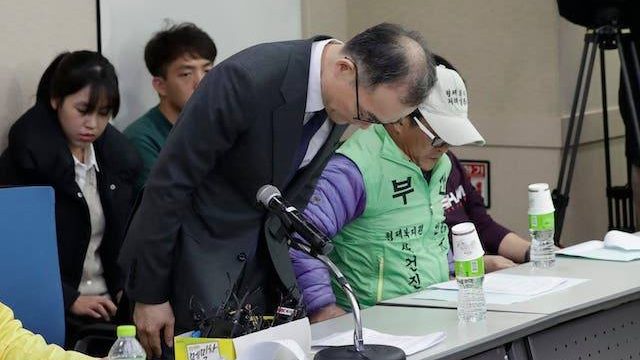 South Korea’s top public prosecutor has apologized for a failed investigation into the enslavement and horrendous human rights violations of thousands at a facility for vagrants — called Brothers Home — in the 1970s and 1980s.

The apology comes nearly three decades after the owner of the facility was acquitted of serious charges.

“The past government created a directive that had no base in laws and used state power to detain citizens at the Brothers Home confinement facility with the disguised purpose of protecting them; more than that (inmates) were subjected to forced labor, while experiencing brutal violence and other harsh violations of their human rights,” said Prosecutor General Moon Moo-il.

Moon delivered his apology in a meeting with about a dozen former inmates, most of whom were children when they were snatched off the street by police and city officials and locked up at Brothers Home. They spoke of their experiences at the facility, including slave labor and near-daily assaults, how their sudden disappearance ruined their families, and how they have struggled with their lives since.

“I have no friends because I couldn’t go to school,” said Park Sun-yi, who spent more than five years at Brothers Home after being snatched by police at the age of 9. “We have no families to go to at Chuseok,” she said, referring to the Korean Thanksgiving.

No one has been held accountable for hundreds of deaths, rapes and beatings at Brothers Home that were documented by an Associated Press report in 2016 . The AP report was based on hundreds of exclusive documents and dozens of interviews with officials and former detainees, which showed that the abuse at Brothers Home was much more vicious and widespread than previously known.

From the 1960s to the 1980s, South Korean military dictators rounded up thousands of homeless and disabled people and children, sending them to facilities where they were detained and forced to work. Brothers Home was the largest of them all with nearly 4,000 inmates.

Kim Yong Won, the former prosecutor who exposed Brothers Home, explained that the office of military strongman Chun Doo-hwan had blocked his investigation into the facility, fearing that it would embarrass the country on the eve of the 1988 Olympic games.

“The prosecutor general’s apology is an important step toward fully revealing the truth of Brothers Home and compensating the surviving victims,” said Kim.

Survivors of Brothers Home have received no compensation for their suffering, though Moon Moo-il is now asking the Supreme Court to revisit the charges against the late Brothers Home owner, Park In-keun. In 1989, the court found that Park had abided by a government directive to round up vagrants, thus acquitting him of charges of illegal confinement of inmates.

Prosecutor Moon is now pushing for an “exceptional appeal” in order to get the Supreme Court to reopen the case and correct grave mistakes of the past.

If this happens, and the court finds that the government failed to protect the constitutional rights of inmates, it would give survivors a strong boost in their appeal for compensation.