Slaves Suing Traffickers is Not New - FreedomUnited.org
This website uses cookies to improve your experience. We'll assume you're ok with this, but you can opt-out if you wish.Accept Read More
Skip to content
Back to Global News 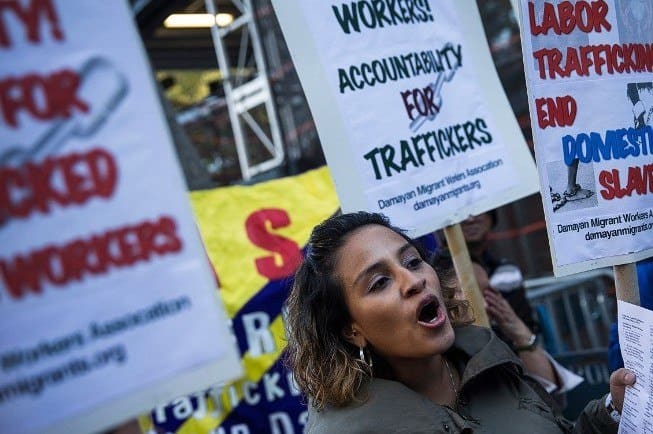 Slaves Suing Traffickers is Not New

Slaves suing traffickers is not new.  This article explains:

Strategic litigation broke the back of the British slave trade. In 1772, James Somerset, an escaped slave brought to England by his owner, Charles Stewart, sued for his freedom. In the case Somerset vs Stewart, the Chief Justice, Lord Mansfield, ruled that no slave could be forcibly returned to a colony for sale. Somerset was the first salvo in a series of anti-slavery civil cases brought in British courts. Those cases helped end the transatlantic trade in slaves. Nearly 250 years later, activists are again turning to strategic litigation to fight the modern day slave trade.

The article goes on to argue that that few are held accountable when it comes to modern-day slavery.  Traffickers face little risk in their big dollar crimes.  A recent example is the Thai seafood issue, where it was revealed that violence and coercion and lies played into the plights of Burmese fishermen enslaved on fishing boats.  They were not paid, but beaten and shackled.

Such reports on world news channels evoked outrage.  But the question remains: Will governments follow through with criminal prosecutions.  …rhetoric is not accountability.  Words will not end–or even deter–these abuses.  Litigation will.

Are we on the brink of a new movement? Recently, hundreds of Indian workers sued a maritime corporation in US federal courts and and won.  The company, Signal, was found guilty of forced labor and directed to pay $14 million to the victims.  They were also commanded to apology.

There have been other such successful cases. Now lawyers and activists are encouraged to see that strategic litigation can combat trafficking by holding those responsible accountable.

Victims are permitted in the United States to seek damages from traffickers and others who “knowingly benefit” from their crimes. There have been 150 cases filed since 2003.  The courageous survivors of trafficking who have pressed courts to hold accountable those who exploited them will make a difference in the Movement to end human trafficking.  One survivor of slavery in the fishing industry said, “If Americans and Europeans are eating this fish, they should remember us.”