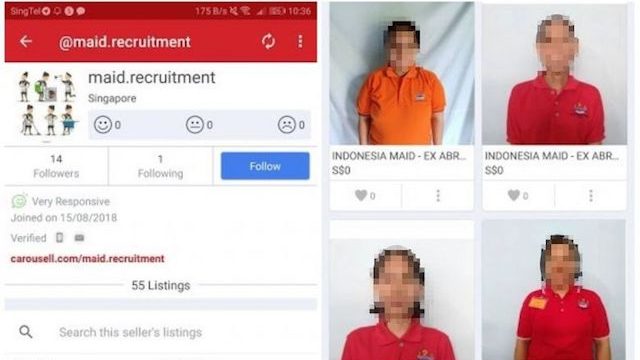 In Carousell ads put up by user @maid.recruitment, the faces of several domestic workers from Indonesia were posted. Some of the profiles even indicate that the maids have been "sold." Photo credit: The Straits Times

A Singaporean online retail app, Carousell, has been advertising Indonesian domestic workers, publishing their photos and even marking them as “sold.”

Upon the discovery, Indonesian migrant worker rights NGO Migrant CARE blasted the adverts and called for legal action against the user that uploaded the ads.

”There must be standards and a code of conduct in providing job openings and employment information for migrant domestic workers in accordance with human rights requirements,” said Wahyu Susilo, Migrant CARE’s executive director.

In online listings placed by user @maid.recruitment, who joined Carousell on Aug. 15, the profiles of several domestic workers, allegedly from Indonesia, were being advertised, the Straits Times reported on Saturday. Some profiles even indicated that the workers had been “sold”.

In spite of the public outrage that may ensue, Wahyu acknowledged that the practice of selling migrant workers like commodities was nothing new. For example, he said there had been many advertisements offering Indonesian maids “for sale” on the streets in Kuala Lumpur dating back to 2012.

“There was also a case in Singapore where migrant workers were offered and put on display in stores. This is certainly very unfair and demeaning to the dignity of Indonesian migrant domestic workers,” he said.

“Tomorrow [Monday] on the first working day, the Indonesian Embassy will also send a diplomatic note to the Singapore Ministry of Foreign Affairs expressing concern that similar incidents have occurred several times in Singapore and will request a thorough investigation of such cases,” he said.

In response to the Carousell ads, the MOM said on Facebook that it was investigating and had arranged for the domestic worker ads to be taken down.

A spokesman for Carousell said that the listings did violate their community guidelines, noting that while advertising services is allowed, personnel ads are not accepted.