Seafood Industry Human Rights Abuses - FreedomUnited.org
This website uses cookies to improve your experience. We'll assume you're ok with this, but you can opt-out if you wish.Accept Read More
Skip to content
Back to Global News 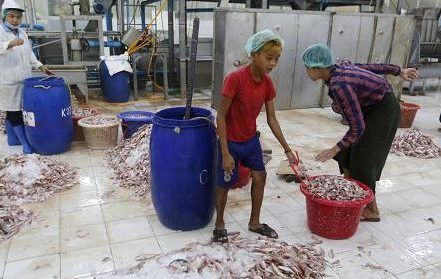 The supply chains and regulatory gaps have made the crime nearly impossible to track, let alone to fix.

Recently, the U.S. government has begun to expand its efforts to monitor and better regulate the seafood industry, recognizing the links between environmental sustainability and food safety. But these efforts have paid too little attention to addressing labor abuses. The solution to these labor problems will require increased regulation, improved corporate sourcing practices, and greater transparency, all predicated on a sharing of responsibility between industry, governments and other stakeholders.

It is believed that one in five children in Myanmar aged 10-17 work rather than attend school.

The World Bank claims that 2.5 billion people globally depend on fish for nutrition. Seafood is in high demand and the need for it is expected to rise due to population growth.

The fishing industry hires more than 58 million workers and activists say it is rampant with human rights and labor abuses. Trafficking, forced labor, and physical abuse of workers at sea and in processing plants are chronic problems throughout the seafood supply chain. News articles tell of fishermen held captive and shackled, as well as migrant workers laboring for 16-hour days.  Many of these reports focus on Thailand, but the crimes are global.

A non-profit report by Verité took a look at Nestlé‘s operations in Thailand where pet food is also produced. Human rights abuses such as child and forced labor were found in the supply chains of Nestlé’s and other brands.

This means that American consumers — and our pets — likely are consuming fish products that were harvested and prepared by people enduring some of the worst working conditions on earth.