Unpaid Beer Tab Leads to Five Years Slavery - FreedomUnited.org
This website uses cookies to improve your experience. We'll assume you're ok with this, but you can opt-out if you wish.Accept Read More
Skip to content
Back to Global News 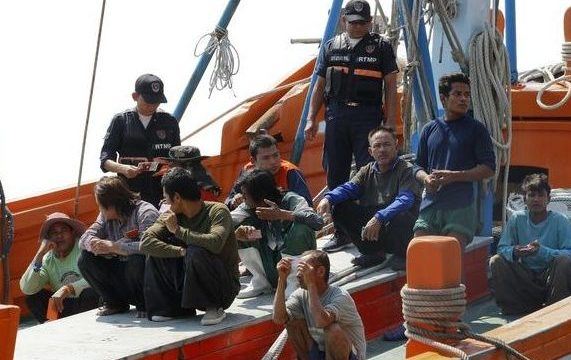 A man from Myanmar passed out, leaving an unpaid beer tab.  When he woke, he was told he must work on a boat to pay for the drinks…

He claims he was forced to labor on a fishing boat in southern Thailand for five years by a broker. Four days after his collapsed, he ended up in the home of the broker and was told he owed 2,000 baht ($50) for the beer and his stay. He was put on the fishing boat and was rescued only after he and other slaves called a helpline.

There are now nine defendants being tried in Thailand’s southern Trang province–including the broker and the owner of Boonlarp Fishing Co. Ltd. who may be the leader of the trafficking ring.

Papop Siamhan is a lawyer for the trafficking victims and says his clients deny all charges.  “This case is important because before the police could only catch the small fish, but this is the first time they got the big fish.”

Thailand has come under fire after numerous reports uncovered slavery and human trafficking in its multibillion-dollar seafood industry. The government recently amended its laws in an effort to combat human trafficking and slavery, ratcheting up penalties to life imprisonment and the death penalty in cases where their victims had died. The Issara Institute, a Bangkok-based anti-trafficking organisation, has been a key point of contact for these trafficked fishermen and said reports of abuses on fishing boats
operating out of Kantang began as early as 2008.

The fishermen began calling the Issara Institute’s 24-hour hotline to complain in May 2015.

One of the fishermen said the captain had threatened to behead him.  He begged during the call, “I do not want to die young. Please help us!”

Another lawyer in the case who works with the Solidarity Center, a U.S.-based worker rights organisation, says, “We wanted to move the case because we are worried about the safety of the victims. They have faced abuse by the broker and her husband, so they are scared, Even though they’re under the care of state authorities, if they come to Bangkok, they would feel safer.

To read the entire article about a man and his unpaid beer tab, click on the link below.