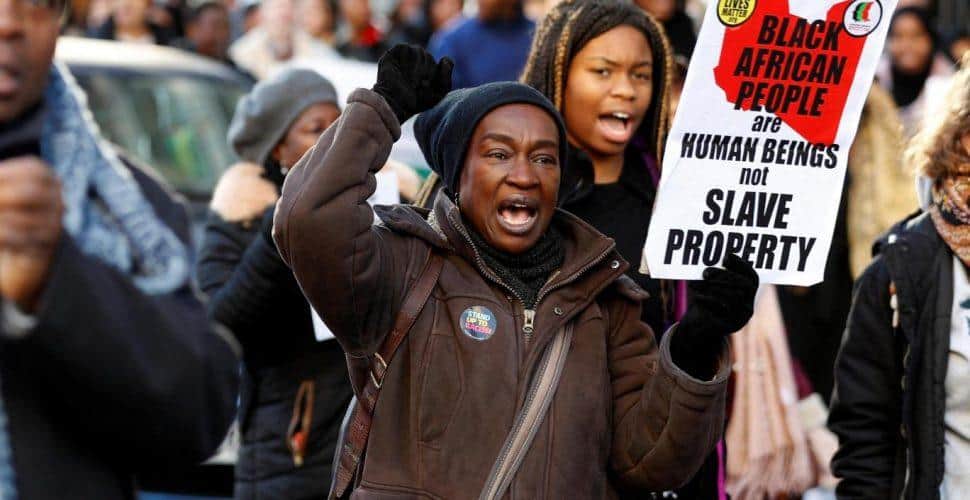 Hundreds of protesters rallied outside of the Libyan embassy in London this weekend, demanding an end to the slave trade that many call a “crime against humanity.”

Protesters carried signs saying “break the chains” and “slavery must go” as they marched from the embassy to Parliament Square.

The Evening Standard reports that the march came about after footage of African migrants being sold off for forced labor was broadcast by CNN:

The campaign was launched after disturbing footage emerged appearing to show people being sold in a modern-day slave market in Libya.

In the video, first made public by CNN, young men believed to be migrants trying to reach Europe are seen being sold off as farm workers.

The footage is believed to show youths from Niger attempting to travel through Libya – which is considered the gateway for those trying to reach Europe.

The organizers of the march, African Lives Matter, said that the slave markets in Libya “dehumanize all of us because humanity is one.” Specifically, they called on detention centers where migrants are held to be closed and for African leaders to step up and “rescue” those being held as slaves.

“This is about humanity, human rights, human dignity therefore we invite everyone who feels this is wrong and must be stopped to join us. Protests definitely work, it gets the word out and sends a strong warning to the criminals. All Africans, all humans are welcome,” added protester organizers.