Progress. But Child Marriage is Still Legal in All 50 States - FreedomUnited.org
This website uses cookies to improve your experience. We'll assume you're ok with this, but you can opt-out if you wish.Accept Read More
Skip to content
Back to Global News 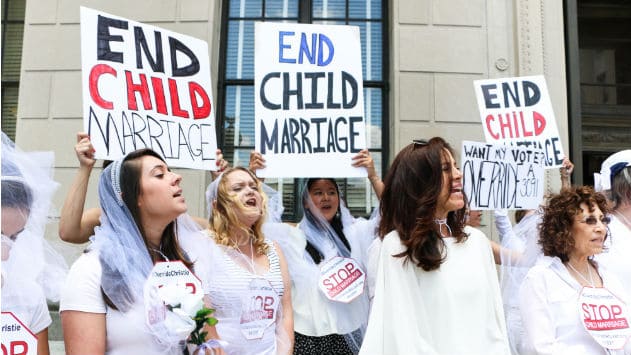 Progress. But Child Marriage is Still Legal in All 50 States

Lawmakers in America cannot ignore the issue of child marriage in America anymore. Research indicates that around a quarter-million children, many as young as 10, were wed in this country between 2000 and 2010. News agencies around the world are noticing.

Following is an excerpt from an article by Fraidy Reiss, the founder and executive director of Unchained at Last, a nonprofit dedicated to helping women and girls in the U.S. to escape forced marriages.

Yet while several states have moved in recent months to strengthen their laws and raise their marriage age, legal loopholes in all 50 states still allow marriage before 18 – and many state legislators remain unconvinced that they need to end child marriage.

Some legislators continue to insist that pregnant girls should marry, despite highly publicized cases of such girls who were forced to marry their own rapists and despite research that shows pregnant teenage girls have better long-term outcomes if they don’t marry.

Marriage before age 18 has such devastating, long-lasting consequences – undermining girls’ health, education and economic opportunities and increasing their risk of experiencing violence – that the U.S. state department considers marriage before 18 a “human rights abuse.” Furthermore, children can easily be forced into marriage or forced to stay in a marriage before they become legal adults, because they face overwhelming legal and practical barriers if they try to leave home, access a shelter, retain an attorney or bring a legal action. Even in a polarized age, we can all agree on ending child marriage. So, what’s the holdup?