GEO Group Sued for Forced Labor at ICE Detention Centers - FreedomUnited.org
This website uses cookies to improve your experience. We'll assume you're ok with this, but you can opt-out if you wish.Accept Read More
Skip to content
Back to Global News 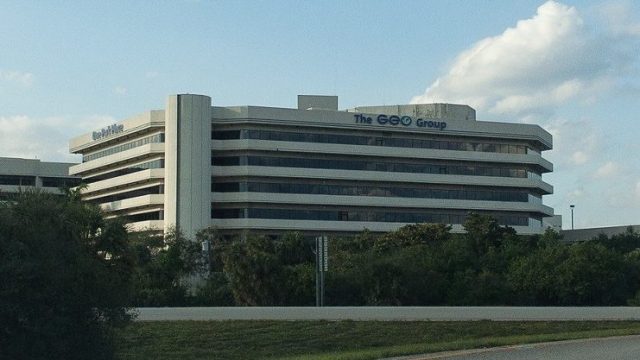 GEO Group, the second largest private prison company in the United States, is being sued by former detainees who allege that the company subjected them to forced labor. GEO Group makes up a large share of its income by imprisoning people that the US Immigration and Customs Enforcement (ICE) has placed in deportation proceedings.

Last week, California inmate Raul Novoa filed a legal complaint against the South Florida company, alleging that he and other inmates were forced to labor inside a GEO facility and that the company “maintains a corporate policy and uniform practice” of forcing inmates to work for $1 per day, which they need to buy basic necessities such as “food, water, and hygiene products.”

Novoa’s suit, which was first reported by Law360, also contends GEO punishes detainees who refuse to work by throwing them into “disciplinary segregation or solitary confinement,” reporting them to ICE, or “referring them for criminal prosecution.”

This isn’t the first time that GEO Group has come under fire for abusing inmates. Earlier in 2017, the American Civil Liberties Union accused GEO of torturing detainees at its facility in Aurora, Colorado by withholding food, water, and access to restrooms.

GEO Group has repeatedly rejected the claims from inmates. In September, the company told Reuters, “The volunteer work program at all federal immigration facilities as well as the minimum wage rates and standards associated with the program are set exclusively by the federal government.”